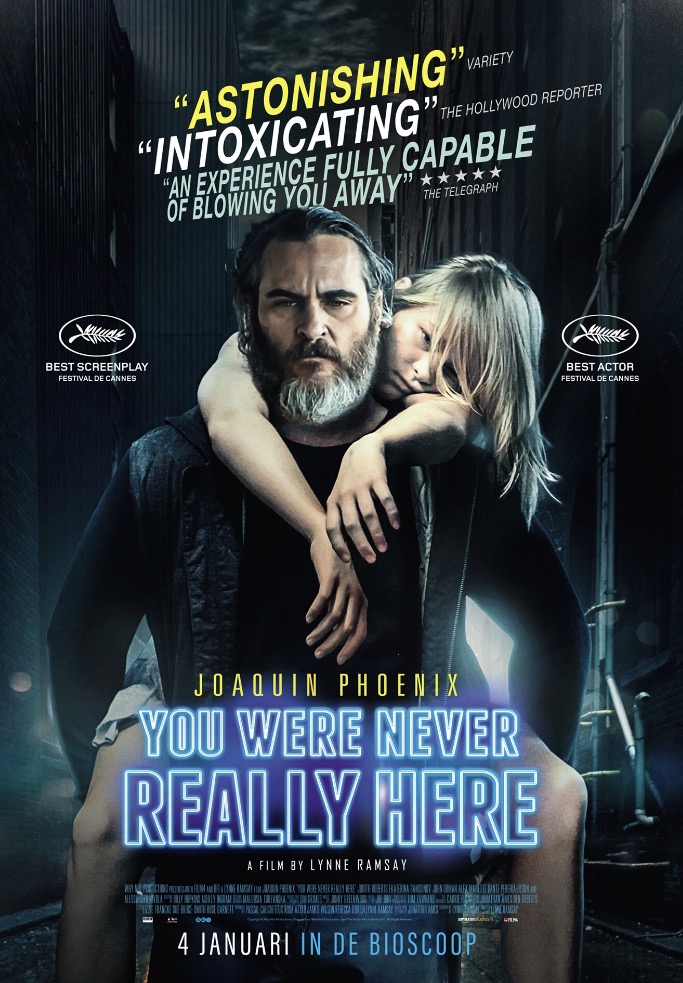 Plot: A missing teen girl spurs a tormented and brutal enforcer on a path of violence against corruption and power leading to a personal transformation. -- Chris Kavan

"You Were Never Really Here" is grim in nature and never uninteresting, but I couldn't help feeling shortchanged by its limited level of psychological insight.

Joaquin Phoenix -- who is one of my personal favorite actors -- delivers an electrifying performance Lynne Ramsay's absorbing thriller, You Were Never Really Here. The film offers up some visceral brutality, gorgeous yet haunting imagery and a fascinating character study. It's a dark film, not an easy viewing, but one that'll be remembered and thought about for some time.

"You Were Never Really Here" by Yojimbo

An ex-FBI agent and soldier traumatised by past abuses both witnessed and experienced is hired to track down the daughter of a prominent politician and punish those responsible for her abduction.

A story of a dysfunctional loner with suicidal tendencies rescuing a teenage runaway from a life of prostitution draws obvious parallels with Taxi Driver, but the feel of this attempted update reminded me more of the emotionally stark brutality of the work of Nicolas Winding Refn. The central performance by Joaquin Phoenix is strong, it is suitably intense and contains some striking imagery, but somehow these elements fail to conspire to become a satisfying narrative; concentrating more on mood than drama, its bleak and laconic style comes across as more pretentious than powerful.

A film that really gets under your skin.

McCleary said you were brutal.
I can be.
I want you to hurt them.

Itâs not just the fact that defenseless young children are victims of unscrupulous people who use them in networks for pedophiles. The most disgusting aspect of this is that these circuits are visited by people who occupy important positions in daily life. Individuals who show a respectable and neat appearance to the outside world. But once they show up in this nauseating business, their fortune is their entrance ticket so they can abuse these innocent children. Joe (Joaquin Phoenix) is someone who wants to set things straight. Armed with a heavy hammer, he beats those perverts from their victims. But âYou were never really hereâ is not just about the existence of childrenâs networks. The film also tries to …

No Sympathy for This Vengeance

Joaquin Phoenix never takes the easy road, whether it is portraying a country music legend, a man falling in love with his AI or a mockumentary about... himself? Whatever the case, Phoenix chooses the role less traveled - and is always up for a challenge - and You Were Never Really Here, if not the pinnacle of his career, is certainly up there with the better characters he has decided to portray.

Many have pointed out that the film shares a lot in common with Taxi Driver, and that is true. Phoenix plays Joe, who has a very troubled and violent past - from childhood through war to the FBI, he has seen and experienced things that both haunt and drive him. Joe is a gun for hire, seemingly often to track down missing children for a fee - and deal great violence (often with a ballpeen …

No posts have been made on this movie yet. Be the first to start talking about You Were Never Really Here!