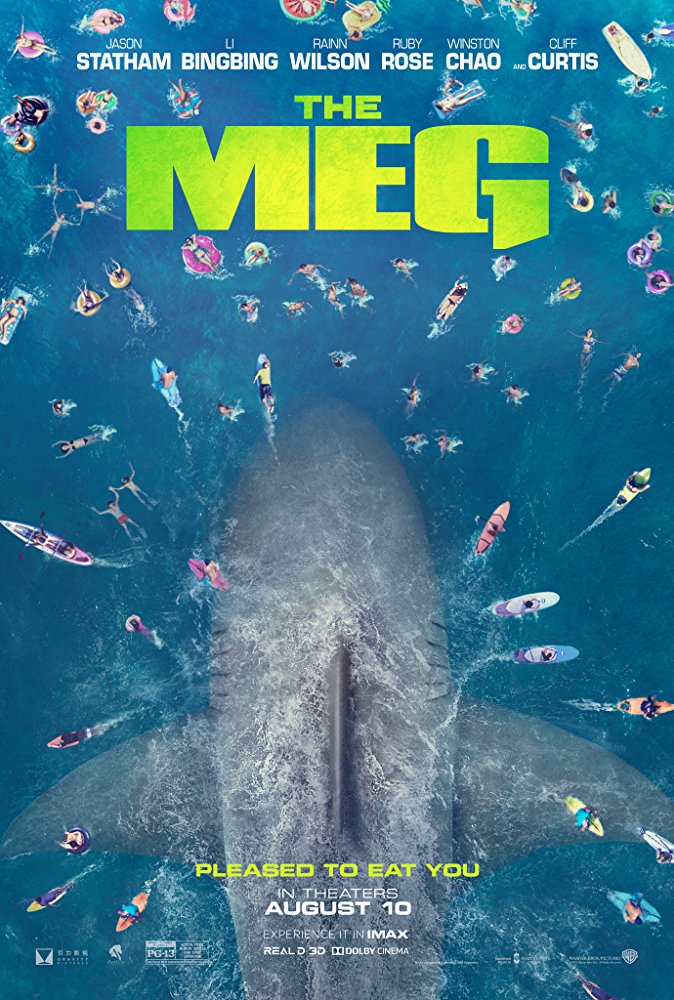 Plot: Jonas Taylor has lost everything - dishonorably discharged, divorced and disgraced - all because of an incident five years ago at the Mariana Trench, one that resulted in him leaving behind half his crew. His explanation is incredulous - the most dangerous marine predator to exist, extinct for over a million years, appeared in the form of a 70-foot behemoth that attacked, forcing him to abort the mission to survive. Present day, a new mission, including his ex-wife, is trapped at the bottom of the ocean in a submersible and he is called to save them. It's dangerous mission, complicated by the re-appearance of the beast. -- Chris Kavan

This is a B-grade goofy popcorn flick that's C-grade level of entertaining.

While this prehistoric monster movie never goes really deep, it's still a lot of fun with spot-on casting, tense moments and character to root for. Sure, it is essentially a summer popcorn flick, but it is one of the better ones and has a nice mix of action, humor and horror. I'm certain this is going to be continued and if subsequent films are as entertaining as this one, I am all full them.

The Meg is a damn shame. What could have been a fun, bloody thrill ride with amazing scares and human-vs-shark action is instead a film that is, surprisingly, painfully boring. Statham is entertaining and that's all the film really has going for it. It's completely devoid of any tension, the body count is ridiculously low, and the PG-13 rating strips it from what could have made it more fun. Maybe Eli Roth should have made it. Imagine that beach sequence with Roth calling the shots...

Jason Statham vs. giant shark - Howâs that for a movie pitch. Ridiculous, but could be fun. And it was enjoyable, especially the last 20 minutes. Which shouldnât be surprising the film swept at the box office and lives up to the concept of Statham fighting an 2.6 million year old, thought to be extinct shark. Just donât be surprised if this becomes a meme in a few years.

The movie literally ends with a Thai version of ââHey Mickey youâre so fineâ.

Still, âThe Megâ was a lot of fun. Is it going to change cinema forever or give you a unique experience? Not really. Itâs one of the dumbest movies of 2018, and yet, you can find some enjoyment out of it. You can even laugh at the corny scenes which was meant to be taken seriously. …

Thank God, the popcorn was for free.

Jonas said something attacked them.
Something big enough to destroy a new submarine.

Iâm happy Iâve watched this movie on the big screen. On the silver screen, the Megalodon (hence the title âThe Megâ) was even more impressive. But thatâs the only thing that can be said about this film. Every film with a shark as the main subject that suddenly transforms into a psychopathic, bloodthirsty hunter, is of course mercilessly compared to the film of all films âJawsâ. A milestone in this genre and unbeatable. Give âThe Shallowsâ and â47 Meters downâ a chance and youâll notice that you watch it rather apathetic without any sense of tension. If you want to stand out in the shark genre, you can throw in some tornadoes so sharks move around in a strange way. By air that …

No posts have been made on this movie yet. Be the first to start talking about The Meg!