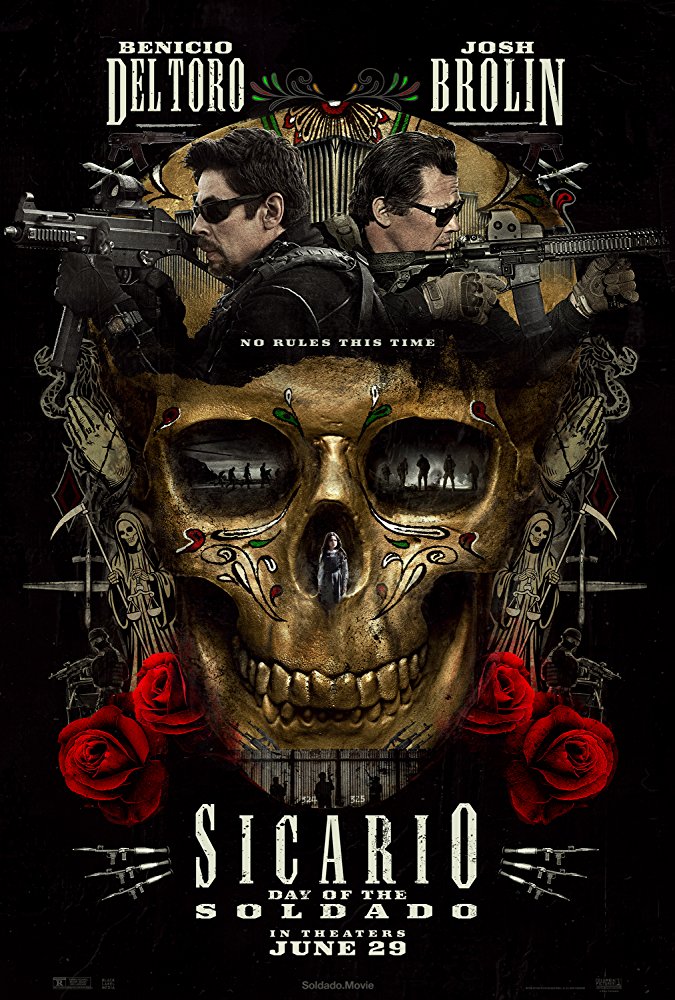 Plot: The drug war on the U.S.-Mexican border has never been deadlier. As cartels rule by fear and violence, they begin to traffic terrorists across the border. In order to stem this tide, federal agent Matt Graver re-teams with the unconventional Alejandro in hopes of making a difference. -- Chris Kavan

Day of the Soldado is a much darker film than the already dark first Sicario. Here, we have no one to root for as even the so-called good guys are duplicitous and self-serving. Sure, you can root for the almost-innocent daughter of the cartel kingpin (played by Isabela Moner) or the lone wolf trying to save her (Benicio Del Toro) or even the agent with a shred of humanity left (Josh Brolin) but, in the end, they all face uncertain futures. If there is indeed a third film planned, maybe we can inject a little hope back into the proceedings as this was a bit too depressing, even if the acting was still on point.

Gritty followup to 2015's acclaimed SICARIO that focuses attention on agents Graver and Alejandro as they wage war on the cartels in Mexico. The story isn't as tightly written as the original film but Brolin and Del Toro are excellent. Up and coming actress Isabela Moner is good as the daugther of a drug lord who winds up kidnapped and later protected by Alejandro. As sequels go it's solid enough but it is hampered by the fact there's no central villain per se so the stakes are not clearly defined.

Given a subject with so much depth and breadth, a more balanced action and narration could have sealed the deal. I felt like the impact became minimal because of being too technical. But overall, still a good watch.

"Sicario: Day Of The Soldado" by Yojimbo

Following terrorist attacks on U.S. soil, Graver and his team plot to destabilise the cartels and their people traffickers by engineering a war between the various gangs.

Sicario was a smart and sophisticated examination of the âfight fire with fireâ mentality of black ops operatives viewed through the eyes of an agent who rather naively still believed in due process. Dispensing with Emily Bluntâs character and instead focusing on Graver and Alejandro, the attempt at providing a moral compass is replaced with the rather contrived sentimentality of their paternalistic urge to protect a teenage girl â who happens to be the daughter of their target. This leaves a dynamic that is far more like the usual âblack hats versus white hatsâ mentality of the Hollywood blockbuster, …

No posts have been made on this movie yet. Be the first to start talking about Sicario: Day of the Soldado!