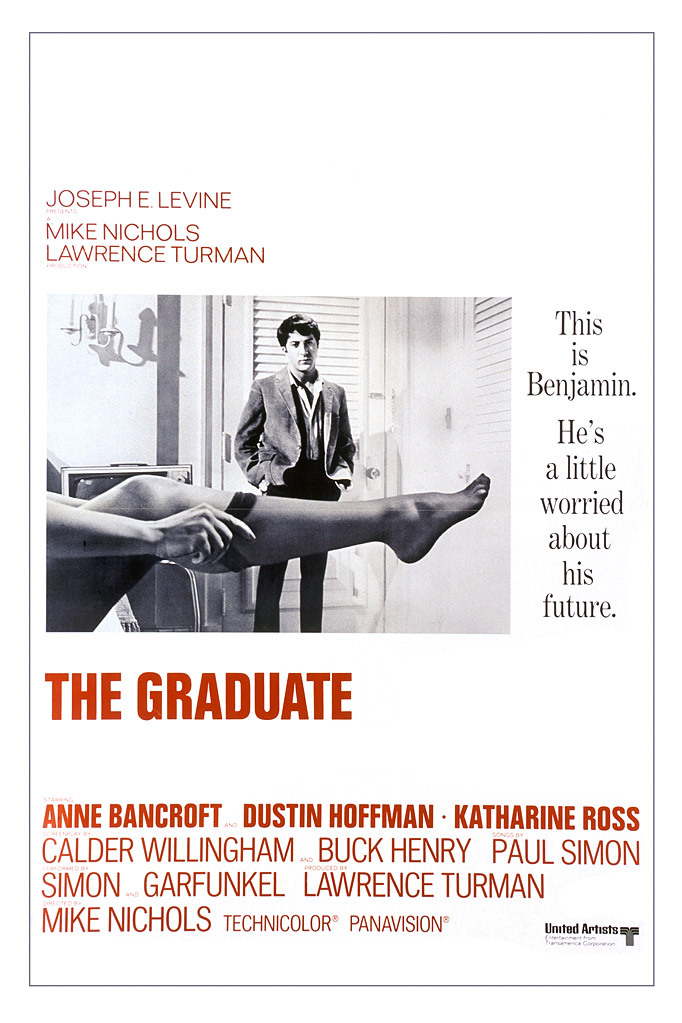 Plot: A young man, entering the real world meets the sultry wife of his father's business partner, only to fall in love with her daughter.

A classic, plain and simple. "The Graduate" is an untouchable comedy and time capsule of the mid-60s.

Nichols explores similar territory in this satirical masterpiece, funny since the peculiar opening credits. An absolute delight, just like Anne Bancroft "trying to seduce" a young and naive Hoffman. 94/100

'The Graduate' is many things. It's a solid presentation of the uncertainty one has between schooling and the adult years. It's also a tantalizing drama about a racy affair. But mostly, it's a portrait of the choices we make whilst in a state of rebellion and the possible repeat effect they could bestow upon those close to us. Terrific performances and music selection carry this point to a finale that many interpret differently. Whether you believe the ending signals a happy victory or a hasty retreat, there's no denying that the events beforehand still resonate with the target age group.

Excellent, excellent, excellent. This brilliant film launched the career of one of Hollywood's greatest actors, Dustin Hoffman. After a few short moments, it's easy to tell why. His performance as Benjamin Braddock is flawless, to say the least. Alongside Hoffman is Anne Bancroft, who also gives a stunning, memorable performance as Mrs. Robinson. Katharine Ross also is convincing as Elaine Robinson.
The best way to describe The Graduate is just that it's so memorable. Every scene is so unique and so different. The scuba-diving scene, Hoffman with the cross at the church, the final bus scene. It's just a joy to watch... The great soundtrack by Simon and Garfunkel is also quite nice. If you haven't seen this film, see it. It's wonderful and I cannot recommend it enough.

Keeping the human spirit alive can be more complex than one may think.
After all, what is the 'human spirit'? The meaning of life?
Is it to experience unorthodox things more often, to explore the stretchable boundaries of youth, or to rebel against what everyone may think is the right thing for you?

The Graduate may well be the most complicated, over-analyzed and misinterpreted movie ever made, because moviegoers and critics alike talk so many theories into the subject that it becomes clouded.
Precisely because it is so convoluted in terms of life, this movie succeeds in so many ways.
My general perception of the story differs every time I watch this movie, that is why it is such a delight to watch.

"Mrs Robinson, are you trying to seduce me?"

21-year-old Benjamin Braddock (Dustin Hoffman) has just graduated from college and has no clue about what he wants to do with his life. His upper-crust parents mistakenly think that he'll probably go to graduate school, after some much-needed rest and relaxation.

Mrs. Robinson, (Anne Bancroft) the wife of his father's business partner of course had plans of her own. She tries to seduce him, and he eventually lets her, in private liaisons at an upscale downtown hotel. The affair continues on for a while with little problems, that is, until, Elaine Robinson (Katharine Ross), the Robinson's college-bound daughter, comes home from Berkeley and Ben suddenly finds some direction for the first in his life since he came home from college. He now knows what he wants because suddenly he's in …

No posts have been made on this movie yet. Be the first to start talking about The Graduate!