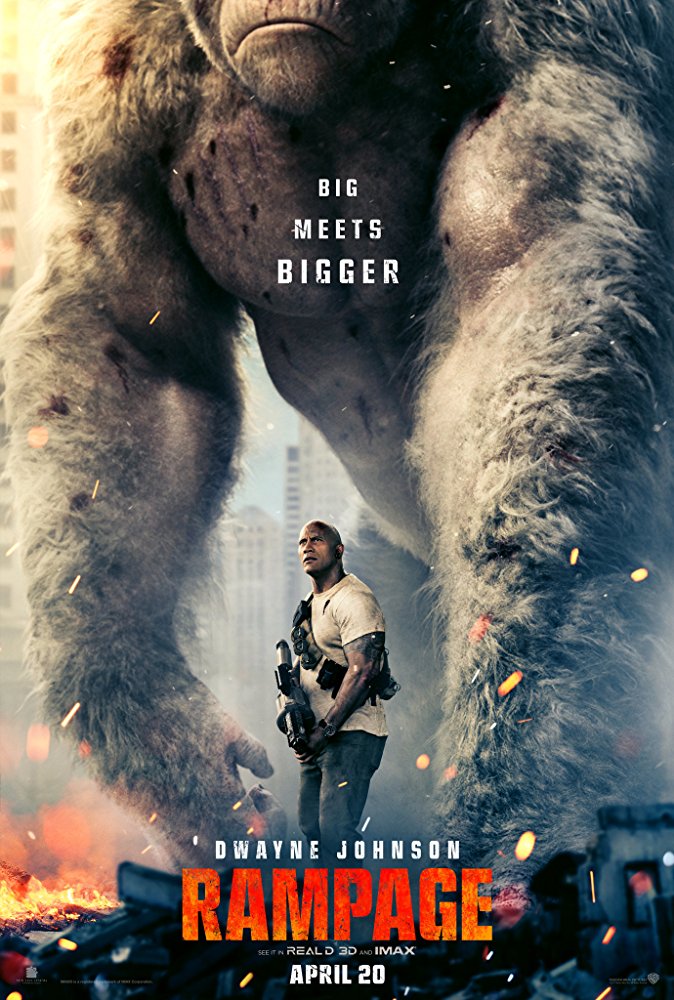 Plot: Primatologist Davis Okoye has an incredible bond with George, an intelligent gorilla he has cared for since his birth. But a rogue genetic experiment transforms the gentle George into a raging monster, hellbent on destroying every city in his path. Davis finds himself teaming up with a rogue genetic engineer, not just to find a cure, but to hopefully save George in the process. -- Chris Kavan

It has more plot that the video game it takes after, but I didn't find the story, characters, or action interesting, and thus wasn't very entertained by "Rampage."

Big, loud, dumb and fun - pretty much exactly what I expected from Dwayne Johnson, a bunch of CGI monsters and Jeffrey Dean Morgan as Negan-lite. Chaos, destruction, man bonding with gorilla - it's like a Hallmark Movie with 100% more mayhem.

One of the better video game movies yet made, but not the best one starring Dwayne Johnson. That's still Jumanji 2. Jeffrey Dean Morgan is a lot of fun as the snarky government agent who helps him stop giant monsters from wrecking Chicago-to the ground anyway. After a solid opening, the second act stalls to explain the plot and it's boring. But the third act is a lot of fun.The action scenes are very well done and the CGI is better than expected. It's dumb of course, and its lame villains don't help, but it's sufficient summer fare.

This is pure stupid and generic fluff, but I can't say I was bored watching it.

Seriously, what did you expect?

Dwayne Johnson is entertaining as always and the chemistry between him and George the Gorilla is very good, but some of the humor and emotional elements didn't work for me.

Jeffrey Dean Morgan is literally playing Negan in this movie. He even dose the lean back and the slow tone talking. Still, he's enjoying every moment of it and easiest the most enjoyable part of the movie.

However, the scenes with Malin Akerman and Jake Lacy are really bad, because both of them can't act and inputs the fast pace. Why couldn't the infected animals be the main villains and no one else?

Overall rating: It's not a great movie or …

A fun movie full of nonsense and total mayhem.

An obscure company conducting scientific experiments related to genetic manipulation on animals on a space station, get the horrible news something terrible has gone wrong. Then you see one of the female crew members getting away by means of an emergency capsule, while a terribly mutated rat is chasing her. And yes. She managed to secure some canisters with samples of the genetic material. Until the emergency capsule explodes and the samples end up on the earth. The result is a trio of random animals that bump into the canisters by accident and inhale a strange looking green smoke. And that is when trouble starts. The result is Chicago being reduced to rubble by the three cooperating giant monsters. Chased by …

No posts have been made on this movie yet. Be the first to start talking about Rampage!