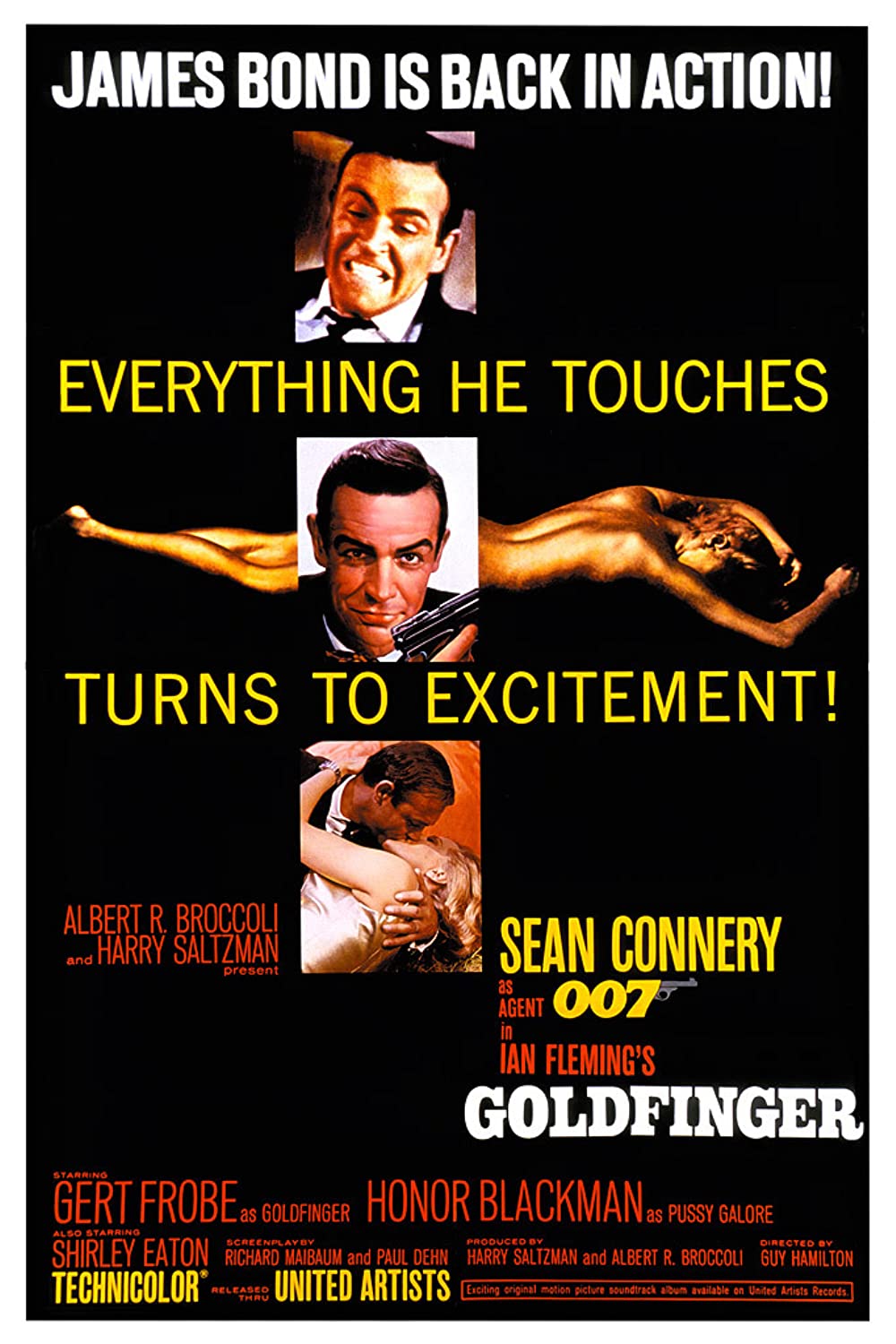 Plot: After finding someone is stockpiling gold, James Bond is sent on the trail of Auric Goldfinger. He soon uncovers a plot "Operation Grand Slam" for Goldfinger to rob Fort Knox and throw the world's economy into turmoil. -- Chris Kavan

Everyone is in top form, from Connery and FrÃ¶be to director Guy Hamilton to the production crew and screenwriters. This essential 007 feature has all the qualities associated with the franchise that make it so unique. "Goldfinger" is the gold standard of Bond.

too slow but nice effort sean connery is the man.this is the 3rd 007 movie of james bond.series.i like it for what it is,it was what it was.nothing more or less.balanced.only character i dont like os odd job..and bond dont just guns here alot..otherwise its a nice entry weak but nice

"A martini. Shaken, not stirred".

Pussy Galore: "My name is Pussy Galore". / James Bond: "I must be dreaming".

The story is about a Bond gets his Aston Martin, spars with two statuesque British beauties (Honor Blackman and Shirley Eaton) and pits his wits against a memorable villain, Auric Goldfinger. Add the first Shirley Bassey theme song and some exciting action sequences and the result is an explosive cocktail. Goldfinger is by far my favorite bond film that I have seen. The main song in this movie "Goldfinger" got stuck in my head while watching the whole film. The two main villains in the movie Odd Job and Goldfinger himself was two remember-able and in my opinion, the best villains in a movie. Odd Job to me was like bane, he can break you with a little touch of hands just like that. Goldfinger has a villain was …

One of the best Bonds!

The immortal line of "Do you expect me to talk Goldfinger?"

âNo I expect you to die Mr Bond" replies Goldfinger should be written down as one of the greatest Movie lines in history.

"Goldfinger" is in my opinion one of the best Bond movie. Sean Connery as James Bond is superb throughout, his delivery of his dialog superb and his performance assured and confident. The basic story is fantastic with a very clever plan for world domination. The villain, played by Gert Frobe, is great as is his deathly servant, Odd Job. Who can forget his steel rimmed hat or him crushing a golf ball in his bare hand? Though he is mute, he simply oozes menace. But there are plenty of memorable images here, too. The girl painted in gold, and the figure of the hit-man reflected on Bond's lover eye are …

James Bond locks horns with an international gold smuggler who plans to break into Fort Knox. The third instalment of the popular franchise sees the formula find its feet and delivers a near perfect cocktail of action, humour and sixties style to create a magic that the producers tried (unsuccessfully) to recapture for the next two decades. One of the obvious reasons for Goldfinger's success is Bond's nemesis himself; gone are the camp caricatures of the previous films, replaced by a cold, calculating criminal mastermind who proves a match for 007, especially during the classic "interrogation" scene ("Do you expect me to talk?" "No Mr. Bond. I expect you to die!"). Honor Blackman also makes a stronger, more independent Bond girl and we see Q Branch for the first time, providing an …

No posts have been made on this movie yet. Be the first to start talking about Goldfinger!