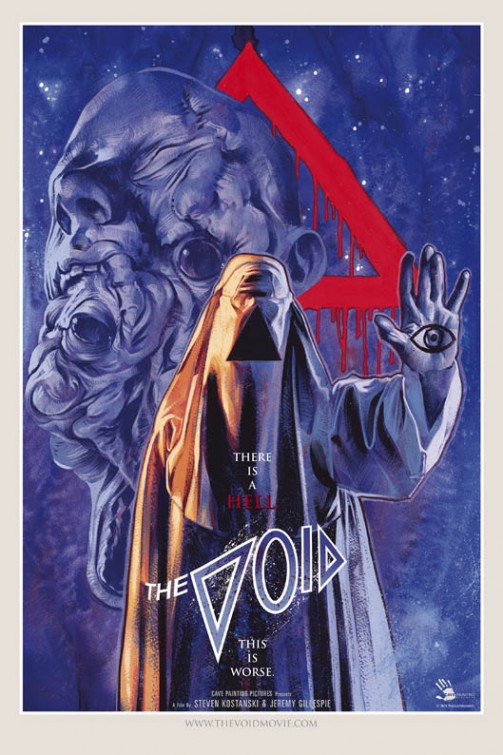 Plot: When a sheriff's deputy happens upon a young man, bloodied and dazed, he rushes him to the nearest hospital - one about to be shut down with a skeleton crew night shift. Things turn from bad to worse, however, with the appearance of cult-like figures and a duo of seemingly crazed men. When people begin turning into twisted creatures, a dark truth emerges, one that not only could spell the end for their lives, but to the world at large. -- Chris Kavan

'The Void' was clearly influenced by the work of HP Lovecraft and John Carpenter in terms of story and style. But manages to be it's own thing rather than reference their work. It's a weird and flawed little gem.

Well-made, mysterious, and frightening, "The Void" is a grotesque breed of horror film with enough fresh blood to make it work

The Void takes its cue from some true horror masters, most heavily inspired by John Carpenter, adds in some nifty special effects creatures, loads of gore and claustrophobic tension. The acting and story are a mixed bag, to be sure, but for a crowd-funded horror film, it was done well.

"We will all be saved. Everything has led to this. I can see it all before me. The infinite astro workings. It's beautiful."

Could it be possible that Gillespie and Kostanski had a few bottles of beer one night and watched their all time favorite film "The thing" together, after which they sat at the table, wrote down some random ideas and made sketches of slimy and crazy looking creatures? Then they came up with some kind of sect resembling the Ku-Klux-Klan. Only their hood was decorated with a large triangle as a symbol. "Perhaps those moviegoers will make an association with the mysterious Bermuda triangle. And afterwards, we'll make up stuff to continue the story. We'll see where we end up." they thought. Well, "The Void" could be the result of this brainstorm session. A horror …

So many Voids so littl.....What the huh?

The Void starts out with a pretty promising 15 minutes but it becomes bogged down for most of the middle with only an all out "Trippy Orgy of Bizarre" final act to keep it from sinking totally into the Abyss of forgettable Horror films. Void is ultimately done in by poor acting by the lead and too many idiotic choices made by all the characters. I kept having the feeling that a scene got missed by me or the film makers. This could have been a much better film with more believable Writing and Acting. I respect the Homage the Directors shows for past Fulci and Carpenter films and the film does have spurts of some genuine tense, creepy moments but they are not built on and scene by scene meanders and suffers through infuriating character choices. Not even some nifty gross out scenes …

No posts have been made on this movie yet. Be the first to start talking about The Void!