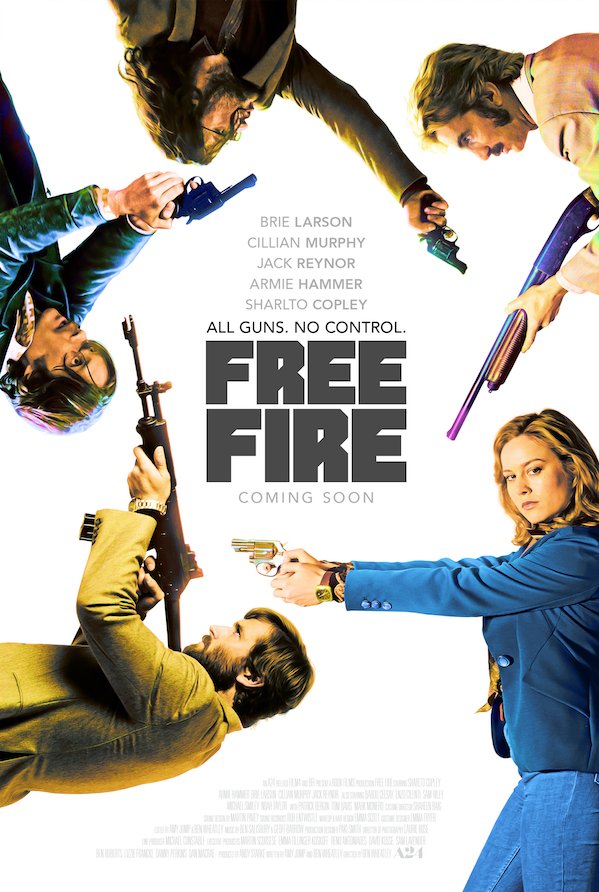 Plot: Boston, 1978 - Two rival gangs find themselves drawn to the same deserted warehouse, which, in short time, turns in to a shootout and a fight for survival. -- Chris Kavan

"Free Fire" aims for something along the lines of "Reservoir Dogs," but it ultimately collapses under its foray into trigger-happy madness.

Literally a free fire. I like the concept but the whole thing, from acting to directing, could have been better. Also, I just wish that there was more progression story-wise. Not bad tho.

It's a 70s-set claustrophobic shoot-out with a killer cast that is, unfortunately, mostly wasted. I love the idea - it seems guns and bullet wounds in most movies are treated as an afterthought most of the time, but here, every hit counts. It gets pretty dark at times, but Armie Hammer and Sharlto Copley help lighten the mood. Overall, it was a decent effort, but not quite as good as I was expecting.

A pair of Irishmen arrive in America in 1978 to buy weapons, but when an argument breaks out during the deal the situation soon descends into a bullet-riddled free-for-all.

Ben Wheatley's stripped-down action thriller has no heroes, gentlemen thieves or assassins with a code of honour; it shows a firefight as a brutal, bloody and above all messy business as a bunch of low-lifes scrabble around in the dirt while they inflict grievous bodily harm upon one another. In fact, the single location of a deserted factory, motley assortment of foul-mouthed villains, bloody violence and blackly comic dialogue is a little reminiscent of Reservoir Dogs...if it were remade by one of the brothers McDonagh,

Free Fire won't be to everyone's taste but the strong cast of hard-boiled wise guys, …

Well this kinda sucks. No I'm not talking about the movie itself, but mostly my expectations for it.

"Free Fire" is a stylish shoot 'em up film with a Tarantino vibe to it. While I wouldn't call it original, as many are saying it is, but I respect Ben Wheatley for taking a concept like this and actually going for it. The performances from everyone were solid and when some of the humor hit, it's pretty funny.

Despite the great cast, the director, and interesting plot; I felt there was something missing from this that stopped it from being great for me. I didn't get any enjoyment or anything special out of this. After the film was over, I got up from my seat and went home without evening thinking about what I just saw. That's never a good sign.

I think if the script was more tight …

No posts have been made on this movie yet. Be the first to start talking about Free Fire!