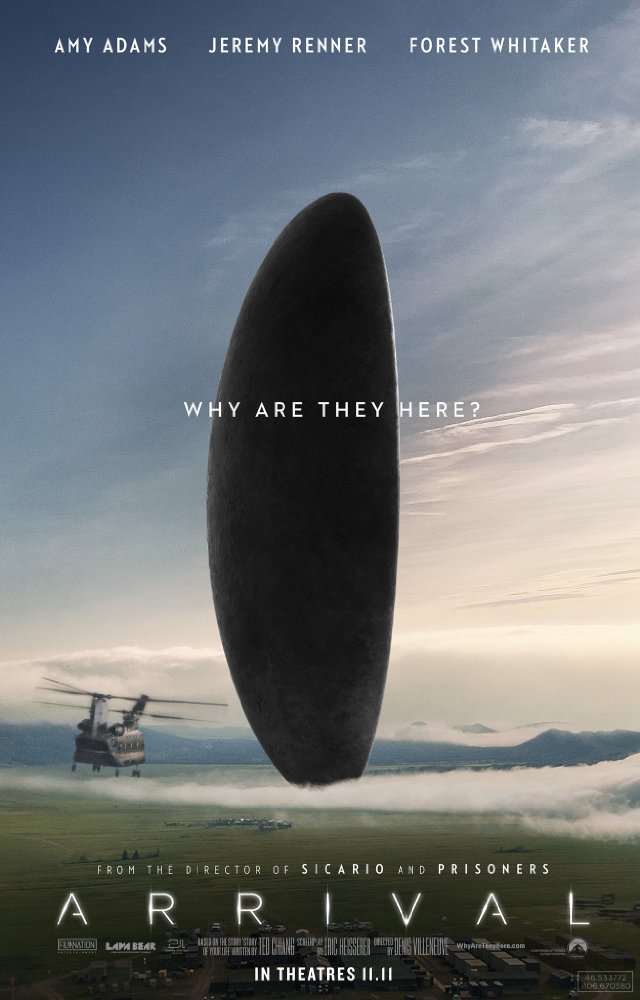 Plot: A series of alien spacecraft land around the world. With humanity on edge, an elite team, led by linguists expert Louise Banks, are sent to investigate and decide whether these beings come in peace or the opposite. Time is not on their side, however, and Banks must take a chance that could threaten her own life - and possibly all mankind. -- Chris Kavan

"Arrival" isn't flawless, but it successfully fits its thought-provoking ideas into its cerebral first contact premise that's reminiscent of "Close Encounters of the Third Kind."

A modern sci-fi masterpiece. From the tonal art direction, to the moody cinematography, to the crucial and snappy editing, to the excellent central performance from the magnificent Amy Adams, without even mentioning the script. It fires on all cylinders.

This film really got me. The concept of universal language transcends to a different level. Plus, it was really amazing how the film managed to talk about science, technology, international relations, and linguistics, all at the same time. Not a fan of sci-fi movies but this one's brilliant and deserves praises!

Twelve alien craft appear around the world prompting the U.S. military to engage the services of a linguist who must ascertain their intentions before their more trigger-happy counterparts declare war upon the visitors.

Although the premise to Arrival bears more than a passing resemblance to that of Independence Day, anyone expecting another CGI infested firework display will be disappointed. There is next to no action during the running time of the film, it instead concentrating on the characters and the grander themes of communication and the need to find common ground and purpose with those who appear âalienâ to us. For this reason it reminded me a little of Monsters in that it is more a story that involves aliens rather than generic science fiction. It also shares plot …

"Remember what happened to the aborigines. A more advanced race nearly wiped them out."

Science fiction is a genre that leaves room for ideological visions and fictional future scenarios. A technological fantasy story, as it were. In "Arrival" this is more applicable on a human level. In this case it's the effort of humanity to communicate with an alien civilization. That's fiction enough already. We're not even capable of communicating with each other as humans in a decent manner. Let alone with an alien race that speaks with the use of primal sounds. It's like having a conversation with a group of surreal musicians who produce ingenious sound effects with polyphonic synthesizers. "Arrival" isn't overloaded with graphical masterpieces what an average person would expect to see in a …

I couldn't stop thinking about this one and may not for awhile. "Arrival" is one of the best Sci-Fi films I've seen in this year. Everything about this film was just top notch that I can't put into words without going all over.

Amy Adams was wonderful in this. A very grounded and real performance. Probably her best. Same thing that can said about Jeremy Renner.

And how the aliens were part of the story was fascinating and quite clever. Without spoiling anything, they had a unique look to them. Like spiders. Although out the film, you feel their presence. A presence that's both scary and yet remarkable.

Denis Villeneuve is my favorite working director. He can release a movie every year and still be close of making a masterpiece. …

No posts have been made on this movie yet. Be the first to start talking about Arrival!