O.J.: Made in America Movie Information 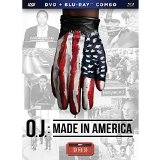 Plot: This Five-Part Documentary explores the life, trail and aftermath of O.J. Simpson. From his college days, to pro football star, Hertz advertising star, budding actor, Brentwood resident to suspected murderer. While the 1994 trail takes center stage, the documentary explores how race and celebrity played a part in the proceedings. Features interviews with many involved including Marcia Clark, F. Lee Bailey, Ron Shipp, Mark Fuhrman, Ron Goldman and two of the jurors among many others. -- Chris Kavan

Fascinating documentary that does an excellent job of exploring the life and trial of O.J. Simpson. While I wish more people involved had decided to be interviewed, director Ezra Edelman managed to get some big names involved with his life and trial on hand. Plus Edelman goes deeper, looking at the factors of how Simpson grew up, his career and his life in Brentwood and the aftermath of the trial. I clearly remember the trial - you couldn't escape it - but it's more interesting to dig deeper and this documentary delivers.

I remember where I was when...

One of he best documentaries that I have ever seen. Yes, this film re-hashes the whole O.J. saga one more time, but this time, it's done very well. But, the crux of this film is about race; how race played into the verdict, how race was treated by the LAPD, and how African Americans felt in L.A.

The film is split into five parts, Part One is about O.J. as American hero. This covers his time at USC and the NFL plus his post-football career until the early '80s. Part Two O.J. is hardly even mentioned or seen, it's about race relations in L.A. from the turbulent 60s through Rodney King in '92. Part Three gets to the meat of the documentary. It covers the abusive and then murderous relationship between O.J. and Nicole. Part Four is the trial and Part Five is the verdict, O.J.'s life …

No posts have been made on this movie yet. Be the first to start talking about O.J.: Made in America!