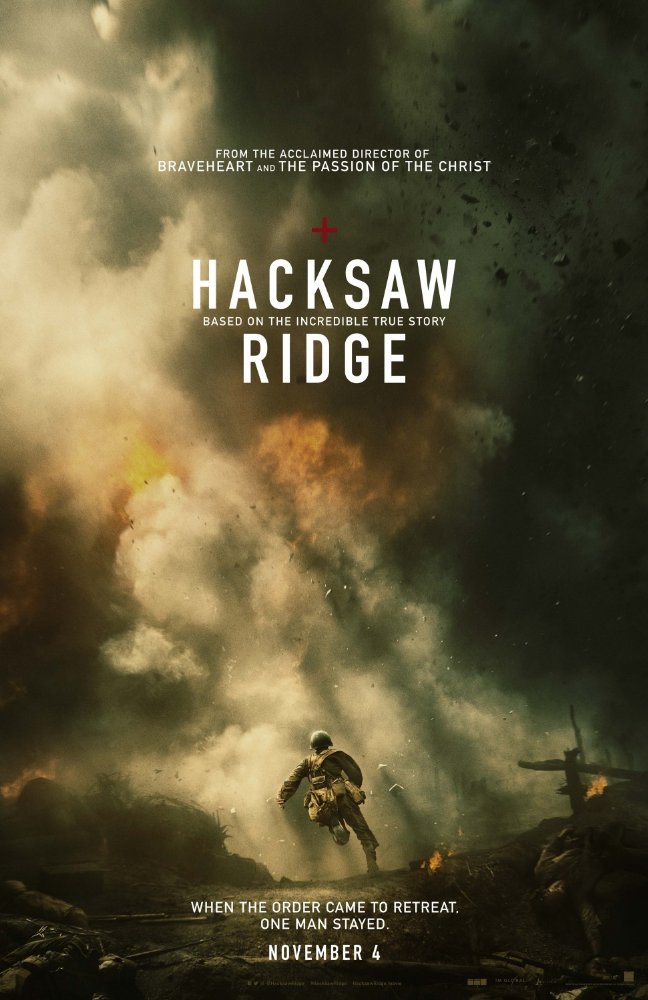 Plot: Army Medic Desmond T. Doss served during WWII, notably in the battle of Okinawa. Heroically, he saved the lives of at least 75 men (with many there saying he saved many more) but, despite being in the army, he also refused to kill any of the enemy. His deeds were recognized and he was awarded the Medal of Honor, becoming the first Conscientious Objector in history to have that distinction. -- Chris Kavan

A powerful and often challenging war pic about personal values, "Hacksaw Ridge" gets an exceptional performance from Andrew Garfield and acts as a fittingly redeeming piece for director Mel Gibson.

Mel Gibson and historical accuracy haven't always gone hand-in-hand (Braveheart and The Patriot) but with Hacksaw Ridge he does justice to Desmond Doss and his incredible story of courage and conviction. I was afraid this film was going to be too preachy or too patriotic, but I think the story was handled very well and the scenes of war were the most realistic and brutal since Saving Private Ryan. Plus, if Gibson can make Vince Vaughn in to a compelling soldier, anything is possible. Certainly among the better films of 2016.

not much to say. great acting unique story , really great brutal action scenes. this is how you make a movie and do it on a modest budget. the big expensive and bad moves need to take note, mel gibson is a great director. a expert at action scenes and conveying a story. nice to see something good for a change.

This flick will blow your socks off

Even the worst horror can't make me look at the screen with disgust. But the moment one of these American soldiers set his hand on a seemingly lifeless body, a hysterical scream sounded and all hell broke loose, it did. The image of that unfortunate soldier whose body is torn to pieces by a devastating hail of bullets, took my breath away abruptly. And that's the start of a brutal and bloody narrative. Yet another unknown story, doomed to disappear in the annals of this terrible great world war. Again the story is infused with some goody-goody events. Plus it has a high "outcast becomes ultimate hero" level. But that's the only criticism I can think of. For the rest, this is an emotionally shattering film.

The film immediately begins with a slow motion …

Hacksaw Ridge may seem like another Oscar bait "true story" biopic that we get every couple of years. The trailers didn't help at all, as it made the film look corny and very award bait. But guys trust on this, it's nothing like that. There's nothing glamorous about this. When it was over, I left was speechless. This is such a great movie.

Say what you want about Mel Gibson controversial past and behavior, but I think we must judge the art, not the artist. This guy is an excellent director and a great actor. And you have no idea how glad I am seeing Mel back, as he is the most talented man in Hollywood right now. The most impressive part of Mel's directing in this movie (besides the battle …

If you are still not convinced...

Mel Gibson's new movie Hacksaw Ridge is fantastic. Go see it. It will change your life.

The movie Hacksaw Ridge follows the incredible true story of Desmond Doss, who by the way, I had never heard of before, but I'm so happy that this spectacular piece of film informed me in the best way possible. Doss refuses to use firearms when he enlists in the army for WWII. This creates tension within the group of soldiers and Doss, and might I add, some of the best tension I have ever seen on screen.

The performances in this movie are spot on by every actor and actress, and the camera movement is incredible. Everything looks and seems real! I would say that this film is like Full Metal Jacket, Forrest Gump, and Saving Private Ryan combined.

The theme to this film is extremely powerful for …

No posts have been made on this movie yet. Be the first to start talking about Hacksaw Ridge!