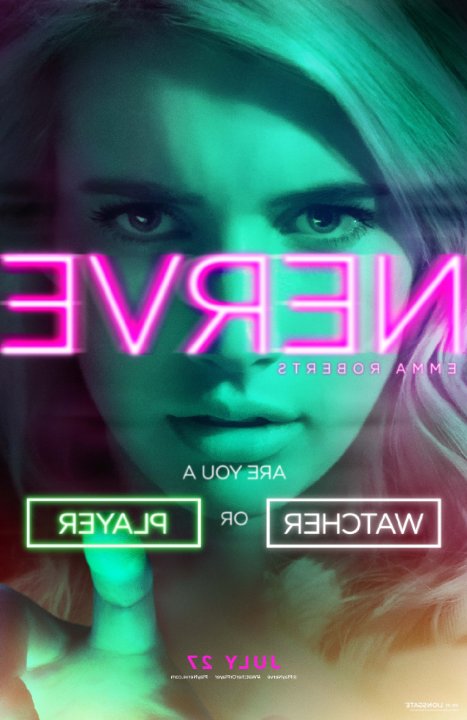 Plot: A high school senior starts an online game of truth or dare, unaware that the game is being manipulated by an anonymous community of "watchers". -- Chris Kavan

People are going crazy sharing their lives with everyone. I prefer to stay as more anonymous as I can. Now Utopia p2p helps me in that. If such service will take place in a real life, people will kill each other in order to earn some money and fame.. Terrific.

In the age of social media, online gaming, apps, and the recent phenomenon known as PokÃ©mon GO, "Nerve" is unbeatably relevant. While it doesn't do its original and intriguing premise entire justice, it's still highly energetic, stunningly stylish, and a whole lot of fun.

A decent teen-targeting thriller that reminds us that no matter how careful we are, you're never truly safe online. Plus, Dave Franco and Emma Roberts work pretty well together thought they kept things pretty tame (it is PG-13). Overall, adults may not find it that compelling but for the target audience, it's a keeper.

'Nerve' is a youthful thrill ride for the modern internet age. Plot revolves around a new underground real-life stunt game in which people watch or participate in dares to win money through a complicated interconnected system of internet social media. The premise makes for a streamlined city scape adventure, allowing the teenage characters to live out their rule-breaking fantasies with little consequence. That is, until the game becomes deadly. The ways in which the game works via internet are sometimes baffling and unrealistic. It's easy to look past and forgive when the film itself is actually quite entertaining. This is a well executed and well paced thriller which gives us just enough characterization to care about these kids. The more daring stunts had me on edge. Very …

No posts have been made on this movie yet. Be the first to start talking about Nerve!