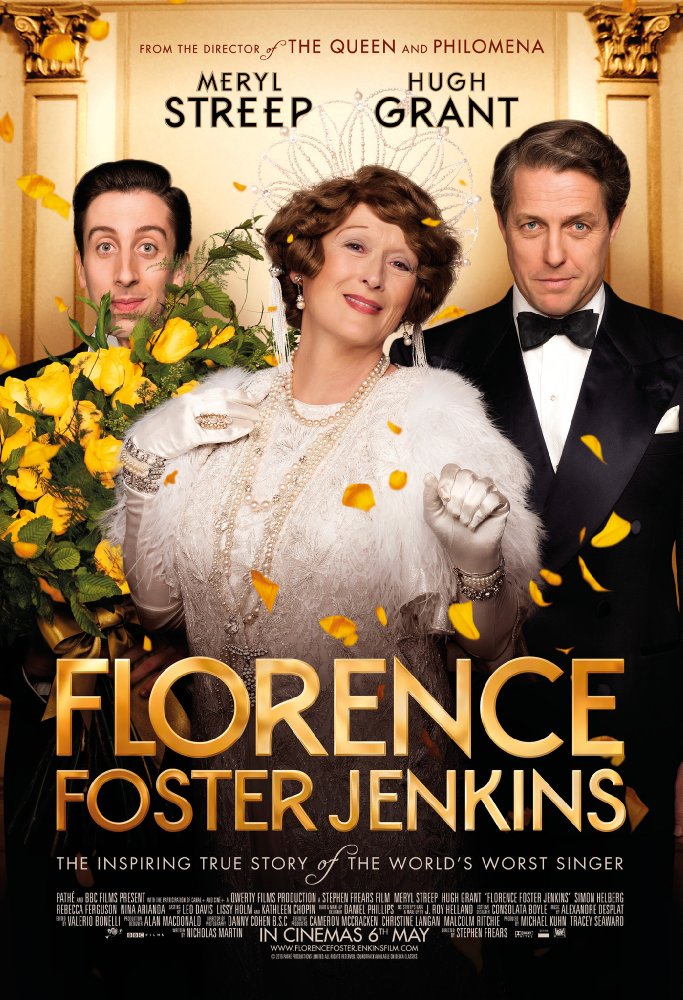 Plot: Florence Foster Jenkins is a New York heiress with the dream of becoming a world-renowned opera singer. There is just the slight problem that she has absolutely no aptitude for singing whatsoever. -- Chris Kavan

Meryl Streep's performance is just one of the many highlights of this shimmering show business biopic.

Simply inspiring story with lovable characters. Of course, amazing performances by the cast. However, I believe this could be grander in terms of cinematography and production design. Overall, watchable!

"Florence Foster Jenkins" hits the high notes with the costumes, the 1940's setting, story, and the warmhearted elements of the film. Especially the performance from Meryl Streep and Simon Helberg who were both excellent in the movie. But Hugh Grant I thought was the most emotional part of the film. He carries the film and this might be his best performance. Unfortunately, this is Stephen Frears least accomplished and weakest movie. Bad editing, energy was lacking, and the film making isn't that special. A decent film with three knock out performances.

'Florence Foster Jenkins' brings us another winning performance from the Streep. She's magnetic as the highly likable, ambitious, yet talentless, aged performer. She surrounds herself with admirers of her character and generosity. It's because of this that they look past her major inability to properly sing. Her off key, off-pitch, attempts at operatic vocals are abysmal, to say the least. Her winning attitude and hints at past failure make her worth rooting for. There is much comedy to be had at her expense of poor talents, but the film finds much more to mine for laughs outside that obvious fact. Grant and Helberg give great supporting performances worth many of said laughs. Honestly, they are both as prominent to the story. The film is sincere in it's depictions of Ms. …

No posts have been made on this movie yet. Be the first to start talking about Florence Foster Jenkins!