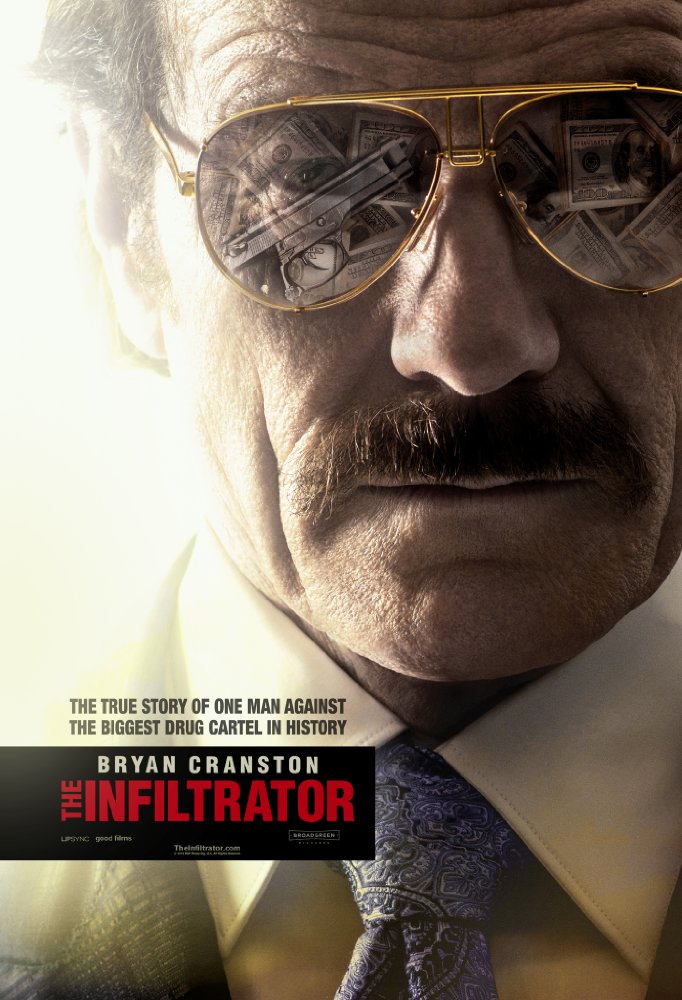 A slow and halfhearted war on drugs crime thriller, "The Infiltrator" can't keep up with the likes of the far superior "Traffic."

Having already experienced the excellent Narcos, it's good to see the American side of the cartels that is portrayed in The Infiltrator. Taken from the book written by the real-life Robert Mazur (who Bryan Cranston plays in the film), the film may take awhile to get rolling, but has plenty of tense moments and a kicker of a wedding. Plenty of great characters and great castings - this is a movie for true crime fans.

The Infiltrator gets off to a slow start but it's telling when you're excited for the finale of a crime drama despite knowing in advance that it won't be a shoot-out;sorry spoiler warning. Bryan Cranston leads a solid cast in this unevenly paced but interesting tru-crime story about unlikely hero Robert Mazur. Back in the 1980s, Mazur was an undercover agent who must destroy the Colombian drug cartel and a corrupt banking empire in one fell swoop. No pressure, right?

A movie worthwhile watching for sure.

A well-written movie based on the true story of U.S. Customs special agent Robert Mazur and his infiltration Pablo Escobar masive money laudering opreration by going under cover and posing as a corrupt, wealthy businessman in the 1980's.

If you enjoyed Donnie Brasco then you'll definitely enjoy this one. Suspense from beginning to end as Robert Mazur goes deeper into the world of drugs, money and murder with his life on the line thoughout. Closecalls and high risk put him and his family in potential danger as Mazur focuses not only on his job but also on the safety and well-being of his family

Interesting conflicts arise, one of which is Mazur's sense of guilt and responsibilty as he begins to build close-frindships with the criminals he is trying to put away while at the same …

Cranston is a Class-Act

'The Infiltrator' is a crime biopic based on the exploits of real life federal agent Robert Mazur, detailing how his deep undercover investigation lead to the arrest of more than 100 individuals involved with the trafficking of drugs for the infamous Pablo Escobar. The film does not shy away from the harsh realities of being an undercover operative. Suspense is constantly generated from the subtle slips that could potentially blow the mission. Danger is felt through the ruthless actions of the criminals and their zero tolerance for any suspicions. We see all of the violent backlash that comes with their secretive group mentality and strong family ties. Mazur's act draws him deeply close to these people to the point where they consider him part of that family. This is one aspect …

No posts have been made on this movie yet. Be the first to start talking about The Infiltrator!