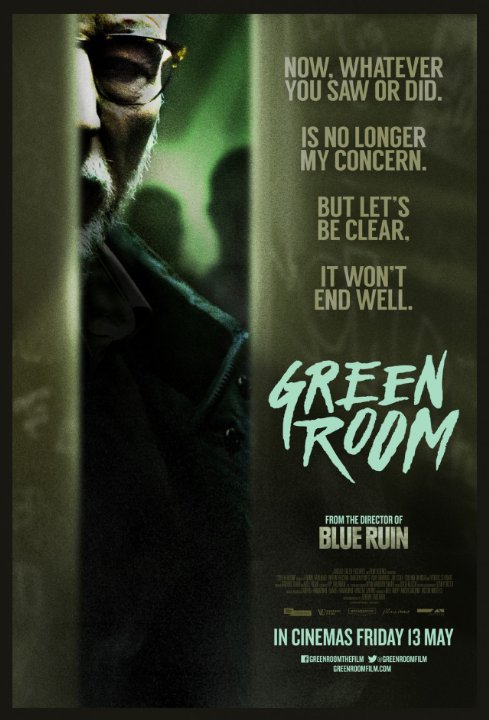 Plot: A punk rock band on a tour in a secluded area of the Pacific Northwest come across a horrific act of violence. Because they are the only witnesses, they soon all become targets of the white power skinheads responsible, and soon find themselves on the run for their lives. -- Chris Kavan

A pretentious noise band on a makeshift tour play gig in a remote compound populated by white supremacists and stumble upon a murder scene. Writer-director Jeremy Saulnier's follow up to Blue Ruin takes the formula of the horror film and applies it to a stranger in a strange land style thriller making for a kind of "Night Of The Living Skinheads". I very much enjoyed his debut and this similarly offbeat offering shares its theme of violence - even perpetrated by the"just" - as an ugly, grotesque, even seedy thing rather than something to be glorified. The result is not for the fainthearted and some of the scenes are guaranteed to make you wince, but it's a suitably tense and edgy affair as this assortment of everyman would-be misfits find themselves fighting for their lives when …

Punk music is raw. This movie is rawer

"Things have gone south, no doubt.
But you know if you don't hand over that gun, it won't end well."

The advantage of watching a movie without any knowledge or awareness of what it's about initially, is that sometimes you can be pleasantly surprised. And that's what "Green Room" did. It surprised me. Either way, I thought it was already interesting because it was about the members of an obscure punk band called "The Ain't Rights". They travel across the U.S in a shabby looking Minivan, going from gig to gig. It's not exactly the comfortable life as that of a successful, richly paid rock-band. On the contrary. They look like undernourished, sleazy-looking bohemians. They don't even have enough money to buy fuel, so they can move on. I admit it. I envied this group of carefree …

I have to hand it to director Jeremy Saulnier, this is a man who has turned violence into a kind of art form. I had high hopes after Blue Ruin and Green Room (not part of a color trilogy or anything) is a fantastic follow-up. Both films are kind of bleak and definitely violent, but instead of using a sledgehammer to get his point across, it's more like a scalpel - and it cuts deep.

Green Room follows a punk band a bit down on their luck (and funds) who take a gig in a shady joint in the Pacific Northwest that happens to house some white power people. Hey, at least they get paid - but just when they're about to leave, they stumble upon a horrific crime and suddenly find themselves held until the leader arrives to sort things out.

The band members are played by Anton Yelchin (in one …

No posts have been made on this movie yet. Be the first to start talking about Green Room!