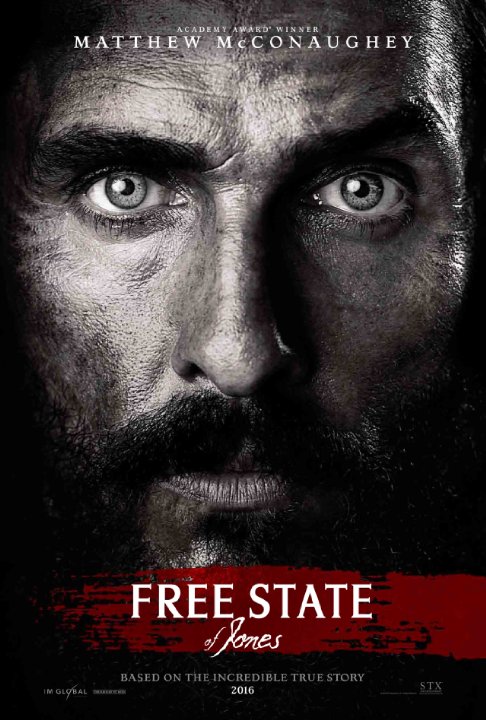 Plot: As the Civil War divides a nation, MIssissippi farmer Newt Knight defies the South by opposing both slavery and succession. He himself succeeds and forms his own "Free State of Jones" with the help of fellow like-minded farmers. The group lead their own rebellion against the South - one that continued long after the war as Knight marries a former slave, essentially former the first mixed-race community in the region. -- Chris Kavan

Despite all valiant efforts, "Free State of Jones" bogs down a fascinating untold true story with an unresponsive script, poor character development, and an irrelevant subplot that interrupts and distracts from the main idea.

The Free State of Jones is a well made historical drama whose heart is in the right place and has all the right stuff to make a worthwhile war epic. But ultimately it doesn't work. I thought people were joking about the pacing but damn this was a slow-as-molasses flick to sit through. The acting is fine and the cinematography is beautiful. It is clear that director Gary Ross intended for this to be a more intellectual version of Roland Emmerich's 2000 release The Patriot. Melodramatic as that was, it did its first task as entertainment as I was never bored.

The Downtrodden Will Rise Again

Free State of Jones imparts some powerful messages on the viewer. As much about class warfare as race, Jones shows us what happens when the have-nots and the persecuted have been pushed too far and how easy it is to start a rebellion when the system is so broken. Surprisingly, that sounds awfully familiar, something I'm sure Gary Ross was all too aware of.

The story of Newt Knight may be a bit streamlined in this version (and like all "based on true story" films - not an exact history lesson) but star Matthew McConaughey is invested in bringing the Civil War deserter, and rebel leader, to life. Stirring speeches, heartfelt emotion and calls to action - this is what you want in a leader. He's powerful but at the same time I get a sense that McConaughey has also become almost too …

'Free State of Jones' has some strengths to start. It begins with a great opening authentic battle sequence and a solid introduction to the main character and his stance to the Confederacy, as well as his personal (somewhat socialist) political beliefs. What's missing from the rest of the film is actual drama and characters worth investment. This decades-long story streamlines Newt Knight's Civil War involvement into history book format. It becomes a series of scenes that relate dates, names, and places on screen to create a continuously jumping timeline of events. The Civil War itself is resolved just after the hallway mark of the film. From that point on everything drags. Dynamic character relationships that could've added some much needed drama are completely brushed over. I …

No posts have been made on this movie yet. Be the first to start talking about Free State of Jones!