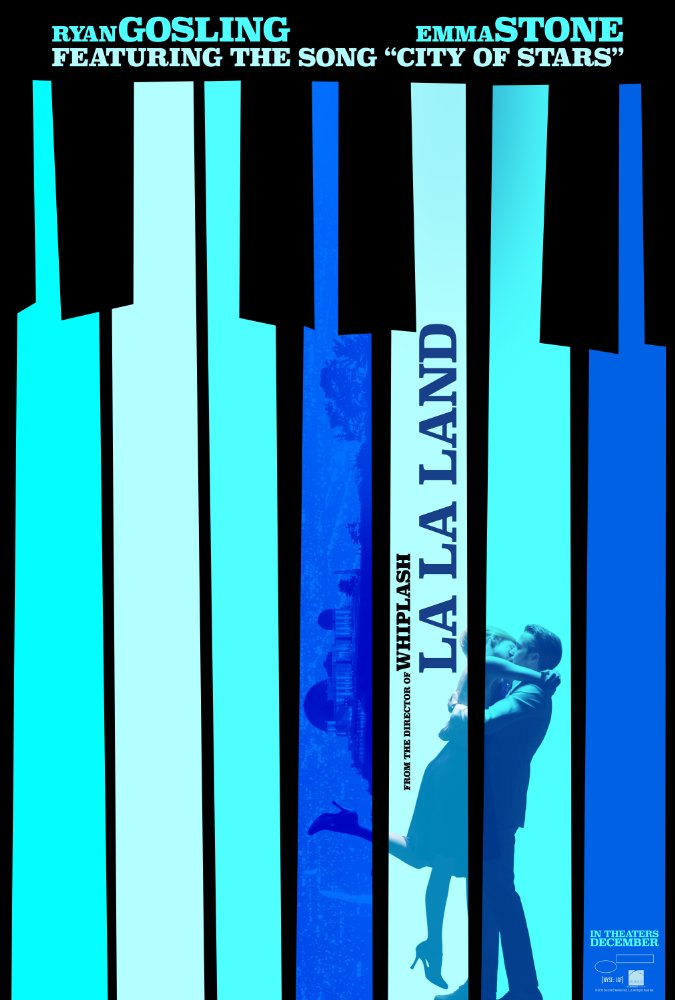 Plot: An aspiring actress who rubs elbows with big stars only by delivering their lattes and a jazz pianist barely making ends meet by playing dingy bars form a quick bond. Yet as each comes closer to realizing their dreams, it starts to tear apart their relationship. -- Chris Kavan

With the blood of old-fashion Hollywood musical pumping through its veins, "La La Land" is sure to win any movie fan over with its shining visuals and toe-tapping, feel-good songs.

La La Land is a brilliantly directed by Damien Chazelle with some of the most incredible scenes (the cinematography truly is a work of art), prefectly acted by two of the best working today, with a wonderful story about the struggle we all face to follow our dreams.

Great acting, music and directing. I like this film because it is a throwback to musicals. Nevertheless there is nothing new and innovative about its narrative or style. A light 3 out of 4.

Who said Oscarbait has to be boring?

A joyously energetic tribute to Hollywood musicals, LA LA LAND is more entertaining thanks to having an innocence rarely seen on modern cinema these days. The characters are world weary but not too cynical, the mood is light but not too superficial, and the direction is undeniably stylish is vibrant w/o being too distracting. This was once the norm for Hollywood films, not just musicals. But then we grew up but perhaps unfairly left such means of storytelling behind. For better or worse.
Emma Stone and Ryan Gosling are excellent together and apart from each other as big dreamers who become lovers amidst the hectic if not cutthroat world of show business lurking behind the glamour of Los Angeles. If there's one complaint that can be fairly leveled at LA LA LAND, it's that the story is …

One of my favorite bands is the Talking Heads. There are a number of their songs that I might call their best on any given day, but I think the one that has always resonated with me most is âLife During Wartimeâ. Itâs a bleak, deceptively energetic song about how living through war strips human beings down to a state of bare subsistence. At the height of wartime, human beings no longer think about things extraneous to their survival. To live through war is to lose the taste for nice things, such as notebooks, dancing, and music in general. Lead singer David Byrne repeatedly wails, âI ainât got time for that nowâ. This song is a sad but clear-eyed observation of how times of great strife and conflict impact our relationship with the art we consume, and the sober conclusion …

It is a City of Stars

First off, musicals are not my thing. I also don't get to the multiplex much anymore, but I had to see this film, because the critics were in love with it. Well...my take is, it's just OK. It's more a love letter to the city of L.A. than it is a love story, I mean, the main characters do not end up with each other in the end. But, I'm fine with that. My biggest problem is with the script itself. The story just was not that good. It was 15 minutes too long and quite frankly I'm not sure if these were good people. Emma Stone and Ryan Gosling's characters definitely loved each other but yet, could not make it work. I think they were too self-involved to actually commit to each other. I'm not saying they had to end up together, but I feel they did not even try to make it work.

No posts have been made on this movie yet. Be the first to start talking about La La Land!