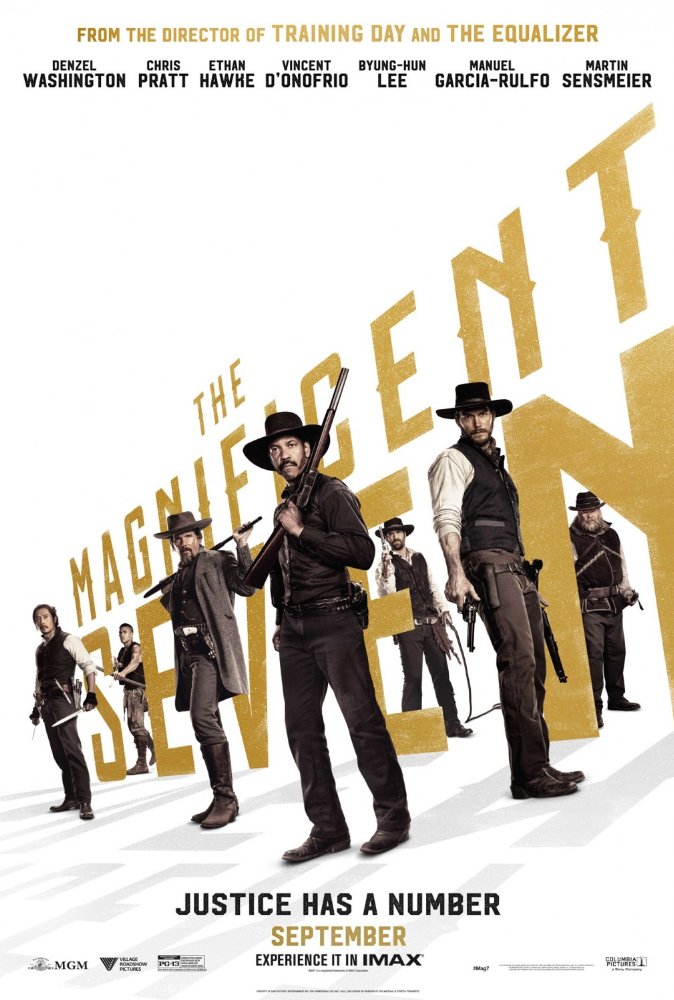 Plot: A modern take on the classic western. When the town of Rose Creek finds itself under the thumb of ruthless industrialist Bartholomew Bogue they set out to hire seven men to men to protect them. Gamblers, cons, outcasts, bounty hunters, hired guns - seven mercenaries find themselves facing a superior force but will not back down from the showdown they know is coming. -- Chris Kavan

This remake admirably reinvents the Kurosawa template that the original followed, but is way too over the top and tonally uneven.

Antoine Fuqua's remake of the classic action western is a solid effort if not quite as spectacular or spellbinding as the 1960 film. Denzel Washington leads a good cast. It's rare to see a western that just wants to be fun instead of something moronic or morose such as this year's Diablo.

"The Magnificent Seven" by Yojimbo

A small town held to ransom by an unscrupulous mining baron enlists the aid of seven gunfighters to help reclaim their land and rid themselves of their oppressor.

The original version of The Magnificent Seven was that rarest of beasts; a remake of such quality that it became a classic in its own right. The differences between that film and this reinvention are obvious from the very start; rather than the original's scene-setting opening where Yul Brinner and Steve McQueen stand up for the rights of a deceased and unknown native American, instead we have a pantomime villain doling out ugly violence and not only that, the only native American onscreen murders a fleeing innocent woman in cold blood. In fact every change to the original story serves to diminish it; instead of poor peasant …

"If God didn't want them to be sheared, he wouldn't have made them sheep."

Anyone who made an effort to read one of my writings, knows about my opinion on remakes and milestones in film history. I'm not a supporter of digging out hit movies from the past, dusting them off and giving them a new look. In most cases nothing new will be presented. In the worst case the result will fail terribly and the final product is a lamentable bad movie. "Ghosbusters" was such a monstrosity in my opinion and confirmed my assertion that certain milestones are untouchable in film history (I'm afraid the remake of "Jumanji" will end up in that same alley). However, there are exceptions like the recent film "The Jungle Book". Although this is not a remake in the strictest sense of the word, but rather an …

'The Magnificent Seven' is the competent remake of the 60's classic that respects the original, but also doesn't try much new. Really, the only differences between this and the original is the reasonings behind the groups formation, the changes in characters and the added level of on-screen violence. That's pretty much it. What this film lacks over it's counterpart is humanity and empathy. The seven main characters, while portrayed by immensely talented actors, are only memorable for their trademarks. There isn't an ounce of comroadarie between them outside of a couple of short sequences of them joking around. I had some fun watching their antics, but I never felt I was having fun along with them. It made me care less when members of the crew were to eventually die. There also …

No posts have been made on this movie yet. Be the first to start talking about The Magnificent Seven!