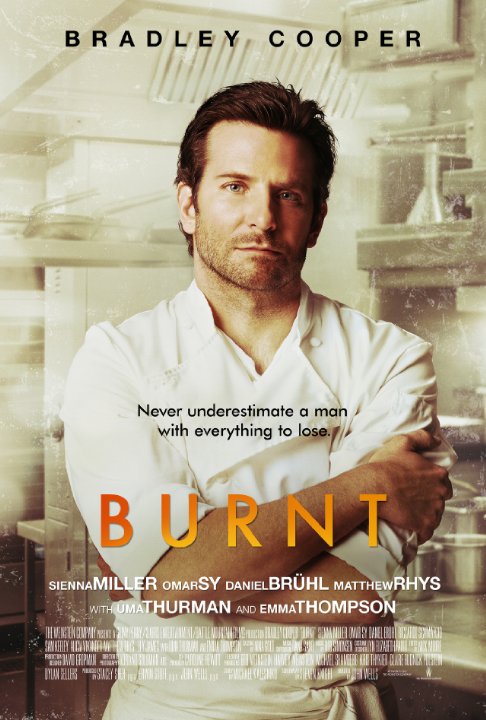 Plot: One-time the toast of the Paris restaurant scene, Adam Jones was a two-star Michelin rockstar, but his bad habits caught up to him. Still having a flair for creating explosive dishes, he is now on the track for his elusive third star - but he will need a new team if he is ever going to reach the pinnacle of the food world. -- Chris Kavan

Jon Favreau's "Chef" had the humor and tastefully absorbing script that this movie doesn't. While "Burnt" does have an excellent style and ensemble cast, it doesn't make the best use of either.

Bradley Cooper plays Gordon Ramsay for a day in this slick and breezy melodrama about a top-notch chef hoping to redeem himself after a much publicized fall from grace. It's a pretty simple and straightforward movie. What's striking is how much an asshole Cooper is in the movie but that's the point .It's not about the restaurant business but an intervention and the subject is Cooper. His drug of choice? His ego. That's the struggle in the movie and yea it's predictable and he's pretty mean-spirited but it's interesting.

I rather watch every single TV show out there that stars Gordon Ramsay then ever sitting through this again. Bradly Cooper really needs to pick better roles in better movies.

Warning : Eat before watching this movie

"To get even one Michelin star, you have to be like Luke Skywalker.
To get two, you have to be... whoever Alec Guinness was.
But if you manage to get three... You're Yoda.
Well, what if he's Darth Vader?"

Adam Jones (Bradley "American Sniper" Cooper) once burned his fingers by living a fairly dissolute life, filled with alcohol, women and drugs. As a top chef his primary concern is to create a perfectly cooked and not burnt exquisite dish. And once more he has that burning desire to get a third Michelin star with his new restaurant in London. Three propositions that perfectly fit with the movie title.

Perhaps you start to sigh in a frustrated way after reading the synopsis. At least I did after I found out it was again about a renowned chef. But then I was thinking about the …

'Burnt' offers less than hoped for, in terms of story and character. It's all centered on one man's redemption from his past addictions and general asshole nature to those who helped him to previous success. We start off with him now sober and reconnecting to those people he had wronged in order to regain former glory in the kitchen. We get some clunky dialogue scenes that repeat the same effect: "I hate you for that thing you did to me, but I'll help you now cause I still like you." Everyone just can't stop liking this guy who did terrible things to his colleagues. That's the main issue right off the top. I didn't understand why these people would let him back so easily and it's hard to find what exactly makes him appealing other than his cooking talents. I couldn't get behind …

No posts have been made on this movie yet. Be the first to start talking about Burnt!