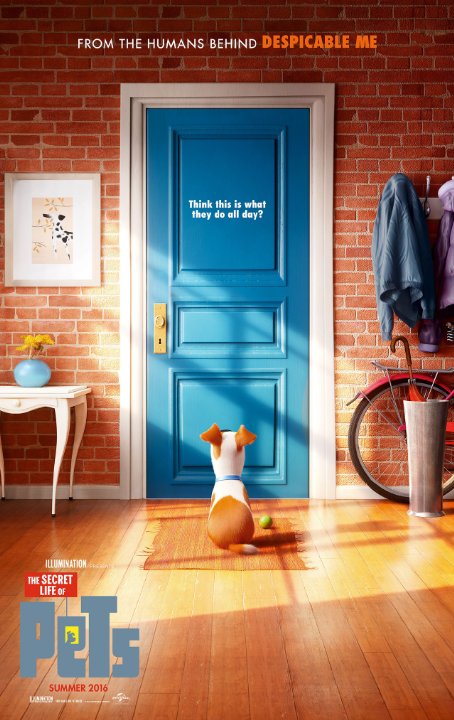 Plot: Max is the lord of his Manhattan castle - being an only pet has its advantages after all. But when his owners bring home an uncouth mongrel, Duke, it changes the dynamics. Yet the two will have to learn how to get along, especially when they discover a plot by the adorable, maniacal rabbit Snowball to unleash the wrath of abandoned animals everywhere on unsuspecting pet owners. -- Chris Kavan

Pretty Good Though the plot is VERY similar to Toy Story, The Secret Life Of Pets is still funny, likable, and well voice acted. Rating: Fresh

The title sounds promising, but "The Secret Life of Pets" offers little more than a generic, overused premise and a loud antics-filled story.

Charming, but I was expecting better. Kevin Hart was the standout as the psychotic "kill all humans" bunny with Jenny Slate a close second as the chipper (but don't get her angry) Gidget. Heck, even Dana Carvey has a mild comeback as an elderly wheelchair-bound hound. Overall it was enjoyable, but nothing stands out to make this a classic.

OK I will be honest with you the kid inside of me was super excited about this one and so were the kids) the kids were teens in this case but who gives a crap) the outcome of the movie was that it was not as funny as what we originally thought from the trailer however I will tell you what it was it was a heartfelt and funny good time for us all the pets were very much like the pets we have at home and that only added to the joy of the movie for us we each fell in love with a special pet ,) my personal favorite was gidget the over excited at times but spunky little dog) we went to the movie for a good time and that's exactly what we got with this one word of warning though yea me and my family are mature enough to handle this but I would like say please watch out with a small child due to …

'The Secret Life of Pets' is the newest offering from animation studio Illumination. Their shaky track record isn't helped much here. We get a varying degree of likable characters grouped in a scattershot zippy comedy, with a plot lifted (beat-for-beat) straight from the first two 'Toy Story's. It's lame and predictable, from a storytelling standpoint. Opportunities for easily obtainable heartwarming moments are completely passed over. However, this movie isn't trying to have more drama than needed. It's main concern is goofy antics. The collection of pratfalls, animal hi-jinx, and random one-liners, are all a mixed bag. Most of the misses were not worthy of a groan or eye-roll. I still had a fair amount of laughs. I liked how no two animals looked, moved, or sounded alike. …

No posts have been made on this movie yet. Be the first to start talking about The Secret Life of Pets!