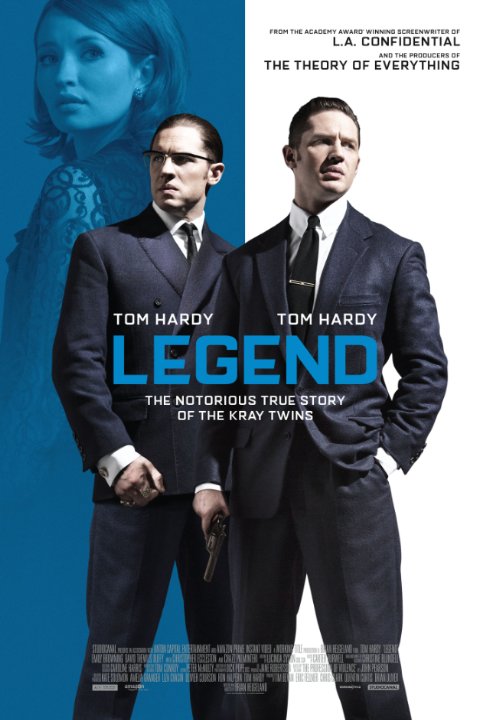 Plot: Follows the lives of Ronald and Reginald Kray - identical twin brothers who rose to power and terrorized London's underworld in the 1950s and 60s. -- Chris Kavan

So dull and unambitious, it barely even makes good use of Tom Hardy's double performance.

Tom Hardy is enormously entertaining to watch as the Kray Twins and that is what makes Legend better than it really is. It begins with the best stuff with a dark sense of humor that makes it more interesting. But everything only becomes more dull once it puts on a more serious face in the second half of the film. Emily Browning is alright as the love interest but Christopher Eccleston is one-note as the cop trying to stop the Krays.

story of the kray twins gangsters who ran london in the 60's Tom Hardy is brilliant in this playing both twins which is not only clever and very well done but really good acting especially with the fatter brother. why iis he not nominated for a oscar for this but he is for the mad max which was just a car chase movie story wise it doesn't go into to much detail of what they actually done in crime, the movie isn't very good for that reason. its more like a soap drama with arguments between the brothers and the girlfriend. and little else. but acting wise from hardy its top class and worth watching just for that

Tom Hardy stars as both Ronnie and Reggie Kray, the notorious gangsters who ruled the East End during the 1960's.

The presence of both Tom Hardy and Paul "Arthur Shelby" Anderson in the cast list goes some way to prepare you for the approach taken whilst painting this portrait of the criminal underbelly of the swinging sixties; namely a Peaky Blinders style combination of retro fashion, pop music and glamorised violence. There is clearly plenty of good source material in the story of identical twins, one psychotic and one rather more business-like who formed ties with both the American Mafia and scandalised establishment aristocracy, but its treatment at the hands of writer-director Brian Helgeland is rather misjudged. The fact that the "legendary" incident to which the film's name …

'Legend' is an average (at best) crime drama/biography upholstered by an energetic and hugely entertaining lead dual role from Tom Hardy. Multiple characters, or twins, are hard to pull of in a film. Hardy manages to make that feat look effortless with his portrayal of notoriously famous gangster twins, the Kray Brothers. Crazy violent outbursts punctuate a typical structure, making routine mundane scenes suddenly pop. I was never invested in the story, but I was consistently entertained by Hardy and the other performers. I especially felt for Browning's character who marries one of the brothers. Though, her narration during the film wasn't all too necessary. There's enough to like here, just don't be expecting a solid crime drama to go along with the memorable performance.

The performance of Tom Hardy is legendary

"Come to Philadelphia! You see a nice girl, we'll get her for you!
I prefer boys. Italians, sometimes Greek, but I am not prejudiced. "

"Legend" certainly won't be remembered as a brilliant gangster movie. You certainly can't compare it with a gangster epos like "The Godfather" or "The untouchables". This film about the notorious Kray twins surely exhibits a successful retro look and shows how the brothers founded their business empire full of glamor and violence, and how it gradually crumbled. Partly because they were constantly watched by the authorities and also because of the psychotic behavior of one of the brothers. The best part of this film is Tom Hardy's acting performance. It looks like a rematch after "Mad Max: Fury Road" where he served as a defenseless blood donor and …

No posts have been made on this movie yet. Be the first to start talking about Legend!