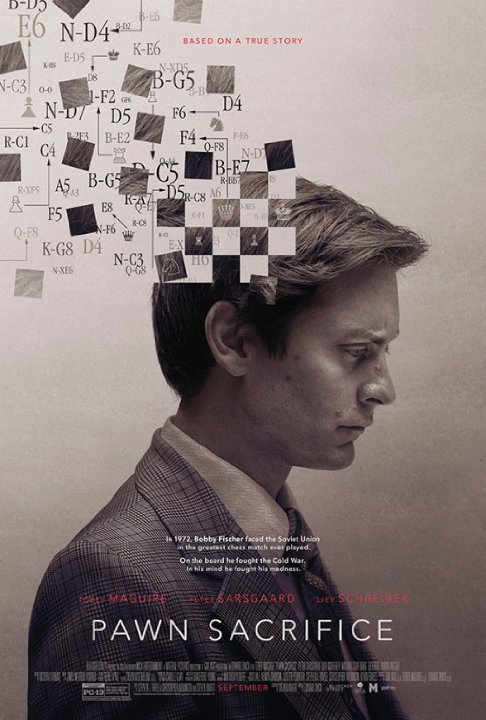 Toby Maguire gives probably his best performance since playing Spider-Man, but the movie too often leads up to underwhelming plot points.

'Pawn Sacrifice' is a biopic of a different breed. We examine the tortured genius of Bobby Fisher during his biggest life event, and arguably the most famous chess game ever. This taught and focused film takes on Fisher's own growing paranoia. Excellent direction and immersive acting bring us closer to Fisher's mindset. Not only how he strategizes in chess, but also in how he becomes more detached from the world in his obsession. Stakes are drawn clearly from the beginning. This is more than just about winning a title. It's about one country besting another. All of that pressure, and Fisher's changing psychology, make this multi-match chess game a tense battle. I never thought I'd be so invested in watching two men play a board game. This is where things shine. The middle …

The Interesting Life of Bobby Fisher

From the director who brought us Glory, Edward Zwick gives us a movie about a prominent chess player with Pawn Sacrifice. Starring Toby Maguire, this is the story of Bobby Fisher as we get into a really intriguing history biopic about his life and how he became the greatest chess player in the world. In addition, the movie shows how he's dealing with paranoia and the way it's affecting his actions and thought process. Which is funny because he's already super cocky and to add that he's paranoid brings an interesting layer to his character. What Edward Zwick has done really well is that he captured the feel of the movie that it took place during the down years of the Cold War. Not only that, Tobey Maguire has done an excellent job playing as the paranoid genius. In a way, it reminds …

Director Edward Zwick, director of one of my favorite movies Glory, has brought us a story about who is considered the best chess player of all time, Bobby Fischer. The story shows his interest in chess, as well as his extremely paranoid attitude towards pretty much everything. Toby Maguire portrays Bobby Fischer, and he did a great job on it, being the paranoid jerk that Bobby Fischer was. The rest of the acting is well done as well, the tension of some of the chess games can be pretty thrilling, and it's just an overall interesting story. However, I'd be lying if I said I wasn't bored a little bit in some parts. I was checking the time during those parts wondering when they will pass. But my biggest flaw with the movie is that there isn't too much of a connection we can make with …

No posts have been made on this movie yet. Be the first to start talking about Pawn Sacrifice!