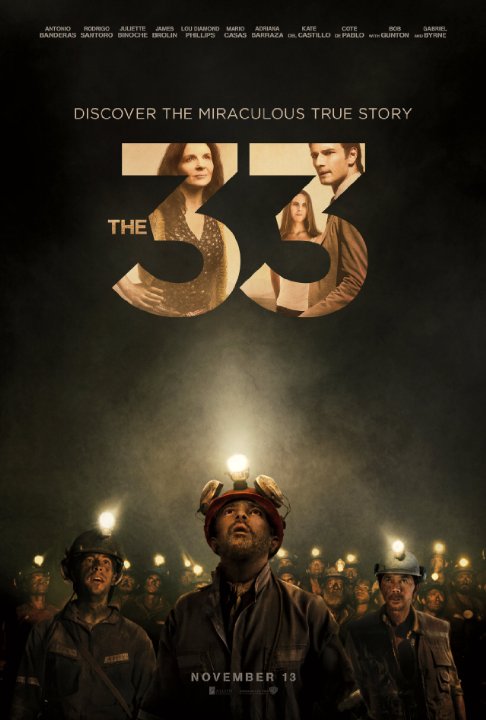 Plot: Based on the true story of 33 Chilean miners who become trapped following a collapse and the harrowing 69-day ordeal that follows. -- Chris Kavan

The theatrics feel fake and empty, the hallucinations are Hanna-Barbara cartoonish, and the film's commentary on working conditions for miners comes off as "preaching to the choir" rhetoric.

Based on true stories can be hit or miss, but The 33 hits mostly high notes and features some great performances from Antonio Banderas, Juliette Binoche and Rodrigo Santoro but it's really the way the cast comes together in the mines (and it is a great ensemble) that truly sets this apart. Plus, this is an event I can actually remember and thus the perspective is greater. A good drama with a lot of heart and a lot of passion and worth the time to see.

"The 33" is impressive, unnerving, claustrophobic and touching at the same time. But at the same time also a bit superficial. The true story of a mine disaster in Chile which happened in 2010. This disaster got a lot of media attention. The entire world witnessed the rescue operation in which all the unfortunate miners were brought back to the surface. One aspect of the movie is hereby nullified. There won't be a surprising denouement. Anyone who follows the media a bit, knows how it ends. One fact amazed me though. How is it possible that precisely in this group the kind of colorful archetypes were present? It seemed as if the group was deliberately composed in such a way that it would be the …

No posts have been made on this movie yet. Be the first to start talking about The 33!