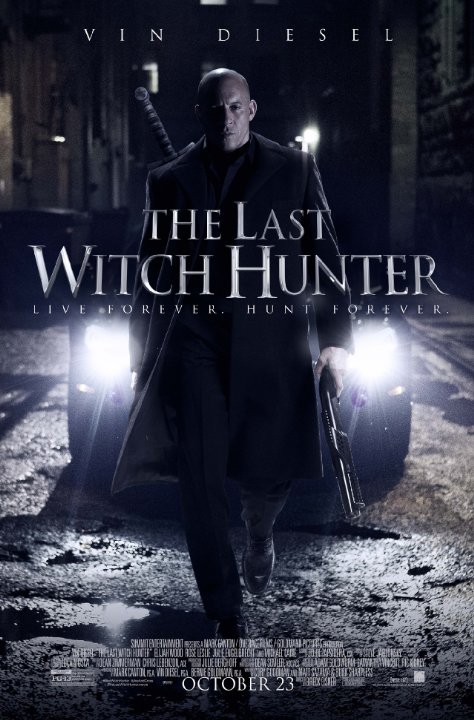 Plot: Immortal witch hunter Kaulder, is the last of his kind and finds himself joining forces with a witch in order to stop a New York coven when they resurrect a witch queen who plans to unleash a plague upon the world. -- Chris Kavan

Vin Diesel wishes he was Constantine or whatever he was trying to do in this movie.

"Today we both die. I curse you with life. To never know peace. To walk the Earth alone for eternity. You will never die."

Isn't it fun when some old-fashioned witch hunting is being used in a typical action-fantasy film. The last time I saw a duo at work who wanted to nip this venom in the bud, was in "Hansel and Gretel: Witch Hunters". The latter was a mediocre film, with the proportionally balanced curves of Gemma Arterton raising more enthusiasm than the film itself. In "The Last Witch Hunter" such a person isn't included, but in return Vin Diesel was willing to appear. And that's a guarantee for bloated body parts. In this case the muscles of this walking wardrobe.

The film needs to warm up just like a real diesel. Once this is done, it switches into a higher gear. Although I …

I wouldn't think that I would have anything in common with Vin Diesel. But, as it turns out, we're both huge nerds who are really into D&D. How much does Diesel like the fantasy game? So much so that he taught Dame Judi Dench how to play on the set of Chronicles of Riddick. So much that he based the main character in The Last Witch Hunter on one of his favorite in-game characters he created. Now that, my friends, is dedication.

That character is Kaulder who, in the opening of the film, is traveling with his brothers in The Cross and Sword to take down The Witch Queen (Julie Engelbrecht), who is responsible for The Black Death (and not questionable hygiene). It doesn't take long for things to go wrong as all sorts of terrible traps and hidden creatures attack. Of course, Kaulder ends …

'The Last Witch Hunter' could've been many things, but one thing it's not is an entertaining film. What sounds like the title to a badass mythical action/adventure, turns out to be a dull tread of exposition and non-stop unconvincing CG effects. The whole movie is constantly exuding setup with absolutely no payoff. This dialogue heavy endeavor wastes most of it's time explaining the rules of this world rather than getting on with the plot, which happens to be super simplistic and uninspired. The characters are all one note, despite being played by good actors. The villainous threat doesn't come about until the third act. Up until then we see our hero meeting person after person in multiple attempts to will himself into reliving a memory so that he can figure out what the ultimate …

No posts have been made on this movie yet. Be the first to start talking about The Last Witch Hunter!