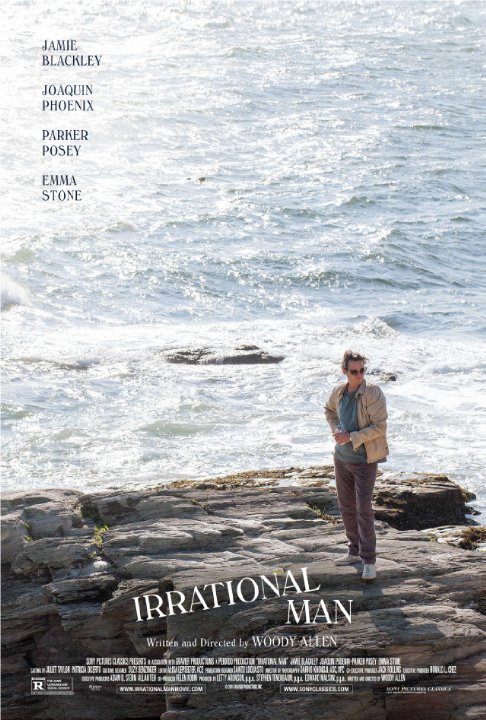 Plot: A college philosophy professor finds himself going through an existential crisis. But he finds new purpose in his life when be begins a relationship with one of his students. -- Chris Kavan

"Irrational Man" constantly cuts itself off just as it starts getting interesting, but the best thing about it is how it takes Woody Allen's familiar themes in a new direction, and does it with an energy that I haven't seen in his films in years.

why was this written? after all, beeing stupid is a drama for the subject of stupidity. for us, seeing this story and its ending is...meh! it is not irrational man, it is rather a stupid guy.

I pretty much only saw this because it was filmed in my home state. I generally like Woody Allen when he's funny, and have little tolerance for him when he is "serious". The odd thing about this movie is that, for most of the movie, it felt like a comedy but without any jokes. There were amusing moments, but nothing *funny*. It was only about 2/3 through that it dawned on me it was supposed to be a drama, and the things I'd found amusing were meant to be taken unironically. I don't think I can call that a success, by any measure.

Odd Joke of a Movie

Initially, I wasn't completely on board with the story. A majority of the first half plays like a typical drama about a middle-aged man loosing some sense of purpose, while becoming romantically involved with a younger woman - something I'd expect from Woody Allen's recent output. It's not played completely serious. There's a free nature about the progression of character. I was liking the dialogue, but not much else. It's not until the second half unfolds that this almost turns into a different film. A new plot takes shape that sees our character find a very unconventional means towards happiness. The idea is amusing because of the juxtaposition of his newfound positivity being linked with something so negative. Watching him fail to handle the secrecy of his acts makes his …

Irrational Man (2015) R A philosophy professor (Joaquin Phoenix) finds a new meaning to life when he gets involved with a student (Emma Stone). This is not a comedy but more like Woody Allenâs drama and mystery films. The film wastes the talents of Emma Stone (Woody doesnât seem to know how to write dialog for her), and Joaquin Phoenix looks lost at times in his role. The film starts to pick up in the 2nd half of the film, but it doesnât save it from being only mildly interesting. There was so much potential with this film but instead of utilizing the very strong cast, the film feels hollow and underdeveloped. Itâs if Allen had an idea for the movie but only wrote one draft, making its story-line and its characters feeble. My Rating: Bargain Matinee - See more at: …

No posts have been made on this movie yet. Be the first to start talking about Irrational Man!