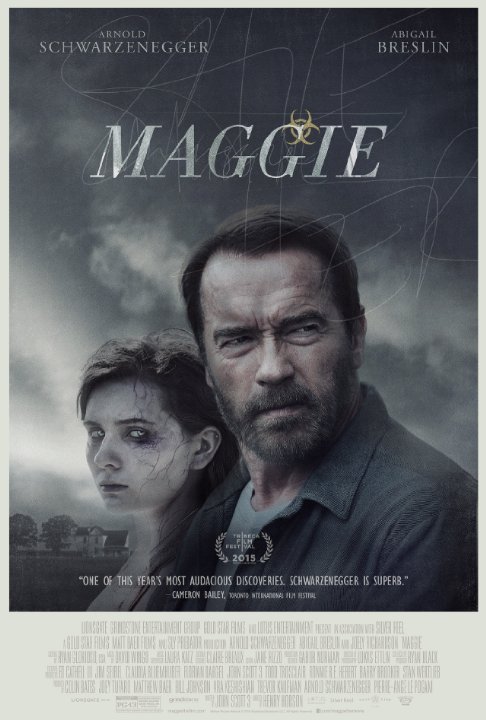 Plot: A Midwestern teenager is infected by a disease that slowly turns the person into a cannibalistic zombie. Despite the growing threat she represents, her father will defy both the risk and the authorities in order to protect her. -- Chris Kavan

It wasn't so bad I thought it would be !

"I made a promise to your mother,that I would protect you. Yeah, but...what about you guys? What if I hurt you? Don't worry.Caroline and I, we know the precautions."

Schwarzenegger performing in a horror that eventually turns into a drama. It's not what you expect from this action film icon. Strange but true, the one-liner "I'll be back" is even being recycled, but it's not said by Arnold this time. One fact is certain, Schwarzenegger will not go down in history as the actor who's suitable for a character part, but I must admit that the effort he did here, produced an admirable final result. After acting as a barbarian, a cyborg returning from the future, a clumsy kindergarten teacher and a pregnant guy, he acquitted himself in a proper way of his role as a concerned father who takes …

'Maggie' is one of those slow depressing dramas about a family dilemma, usually revolving around an illness. Here, that illness is a case of the zombies. The bleak world depicted is just outside the fringe of the typical apocalypse. Everything operates as normal, but in a much downgraded manner. Containment of the problem is at a manageable level. The threat still remains in some capacity. I bought into this world and the main issue facing this family. I thought the performances were serviceable, especially from a much reserved Schwarzenegger. He's able to convey more inner turmoil through less dialogue. I was impressed. The whole film has a much more realistic tone to the characters, dialogue, and situations. It ends up being a drawn out wait for Breslin to eventually succumb …

Maggie - Zombies on a Personal Level

Maggie is possibly the most introspective zombie movie out there. Most films about zombies are about killing them - or surviving them - but zombies are usually highly featured. In Maggie, you see very few zombies and it's really about a father and daughter - their relationship and coping with what is a certain death.

Arnold Schwarzeneggar is the father and despite being one of the biggest action stars of all time, he really manages to pull of a nuanced and even tender role. I have to admit I wasn't sure what to expect, but he really does manage to put his heart on his sleeve and you get the sense he's struggling with what is essentially having to deal with the death of his daughter. His daughter is played by Abigail Breslin - who broke out in Little Miss Sunshine and has previously …

No posts have been made on this movie yet. Be the first to start talking about Maggie!