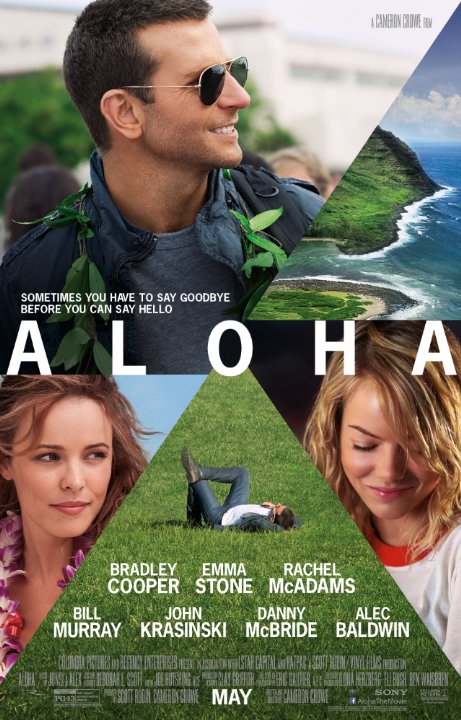 Plot: A disgraced weapons consultant, almost universally hated, finds himself in Hawaii in order to launch a spy satellite at a dormant military base in response to threats from China. Once there, he finds himself drawn to an old flame that got away (now married with two children) as well as warming up to the icy Air Force major in charge of the program. -- Chris Kavan

This is nowhere near as bad as Rotten Tomatoes would have you believe but given the cast involved it should have at least been memorable. Granted, it's not without its charming moments and the actors are certainly trying to make themselves endearing to the the audience. Most succeed like Bradley Cooper and Emma Stone. It's next to impossible to hate either of these actors. But the script is just too busy with so many stories going on at the same time yet nothing seems resolved properly aside from the absurd subplot dealing with a shady industrialist (played by Bill Murray who acts like he's in a different movie). The nasty underlying sense of nativism leaves a bad taste in your mouth but what really becomes insulting is the insinuation of exploitation by big business and the military - …

It really dose hurt when a movie you being looking forward to turns out to be a big disappointment, what hurts more is that it was a huge miss opportunity for being something great.

The story is about celebrated military contractor returns to the site of his greatest career triumphs - the US Space program in Honolulu, Hawaii - and reconnects with a long-ago love while unexpectedly falling for the hard-charging Air Force watchdog assigned to him.

Aloha was my most anticipated film of 2015 just because of the big name cast and the director himself, I mean Cameron Crowe as a film making is just amazing, yeah he had some down falls with his movie but he also made some fantastic movies that today is he's best work. Say Anything, Jerry Maguire and Almost Famous was him at his prime and …

No posts have been made on this movie yet. Be the first to start talking about Aloha!