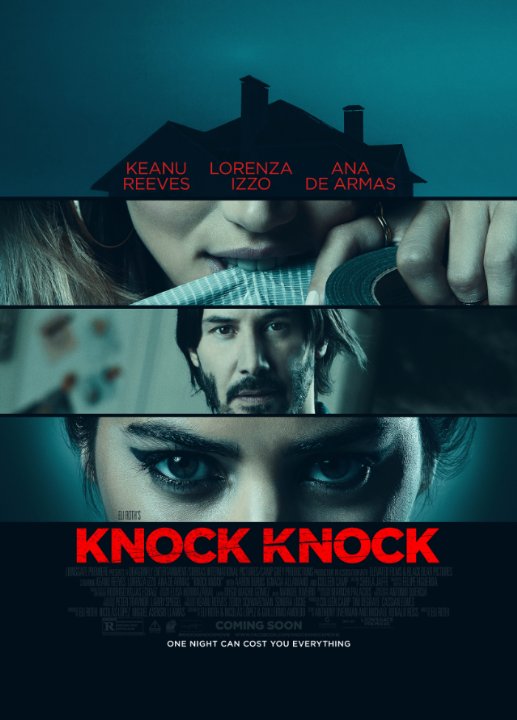 Plot: Two girls in their twenty show up on the door footsteps and ask for help to use the phone. There is more then sex in their game. -- Ionut valentin

Eli Roth still hasn't grown up yet. Oh and this movie would have been so much better if Nic Cage was the lead instead of Keanu. Just imagine him saying lines like "YOU B*TCHES! YOU CRAZY B*TCHES!"

One could see this as a sleazy, torturous, home invasion thriller, but it's not the type of sleaze and torture you'd expect from this source. Our protagonist's life is wrecked by two unassuming sexual deviants. They want to punish this innocent man by taking away his innocence and ruin his life in the process. Physical harm is only a necessity to keep him immobile. Their true intentions are more sinister. I liked this angle. It mostly works due to the layered writing and performances of the two women. They are completely unpredictable from beginning to end. The whole film works solely on their shoulders, and I never once found them to not be entertaining. Keanu, on the other hand, is on and off. Certain scenes between him and the girls manage tension, while others had me …

It's All Fun and Games, Until It's Not

Eli Roth was out of the movie game for awhile following Hostel: Part II in 2007. Now, here we are in 2015 and we have not one, but two, new films from the horror auteur. I haven't seen Green Inferno, yet - but I'm interested as I have seen some of the cannibal films he is trying to emulate. Knock Knock is a remake of the 1977 film, Death Game. I haven't seen that film, either but the plot is the same: a lone man is visited by two, young women while his family is away, seduce him and, essentially, ruin his life and home.

Keanu Reeves stars as man, Evan, an architect who lives in an impressive home with two children and his wife, Karen (Ignacia Allamand), an artist. On Father's Day, the family goes to a beach house while he stays at home to work on a project. That night, two …

No posts have been made on this movie yet. Be the first to start talking about Knock Knock!