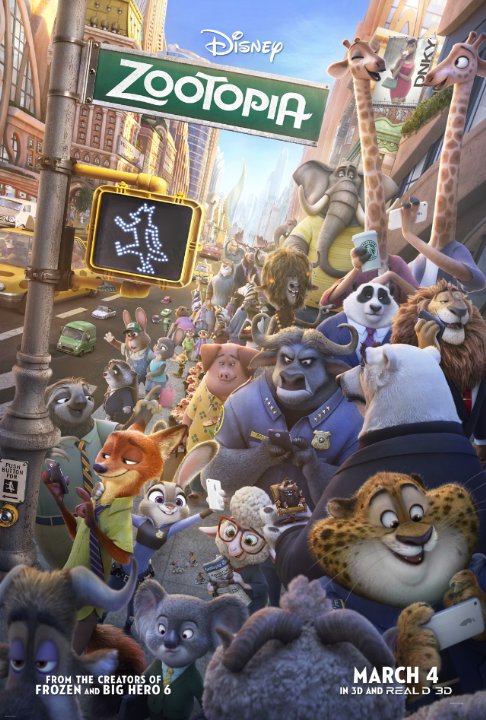 Plot: In the animal city, Zootopia, a smooth fox looking to make a name for himself, instead finds trouble when he's framed for a crime he didn't commit. The head officer, a no-nonsense rabbit, is close behind but soon finds out there is more to the story and must join forces with the wily fox to bring down the real culprit. -- Chris Kavan

Zootopia is a film that everyone needs to see. It is a brilliant, funny, original animated film that was vastly entertaining, and another great entry into the Disney canon. It perfectly encapsulate 2016, telling a wonderful story about equality and acceptance, and filling it with some of the year's best jokes and scenes.

ok this was by far the most fun i have had at the movies so far this year its majour exciting fell in love with spunky officcer judy hop right off the bat then learned to love the wolf max as the story went on it only got better more funny and fun the perfect family movie for almost all ages just m,ay frighten the smallest of kids in some portions but other than that its fantastic see it

Better than a lot of R rated cop movies...

Zootopia is that rare animated movie that is not only charming, heartwarming, imaginative, funny, clever, and visually dazzling but also topical w/o becoming too preachy. The voice cast is strong, with the standout being the paring of Ginnifer Goodwin and Jason Bateman as a spunky rabbit cop and a slick fox con artist. The screenplay works as a solid buddy cop movie in the tradition of 48 Hours or Lethal Weapon except you know it's for kids! The animation and realization of the animal metropolis that is Zootopia is amazing. The film's story successfully tackles surprisingly adult things like prejudice and corruption w/o coming across as the manifesto of an internet SJW. Zootopia is among the best movies of the year and a sure-fire contender for Best Animated Feature.

I feel an animated film's true worth is how it appeals to the audience - both children and adults. If you go too far for children, adults get bored (and maybe some kids too) and while there are plenty of animated films that are more serious - obviously you can't take the whole family out. Zootopia finds that balance between being entertaining for the kids while also providing plenty for adults to like and, besides that, it has a great message to share.

Anthropomorphic characters are always kind of tricky and in these days of CG over traditional animation, I would say even more so. Zootopia takes on that challenge and delivers some very memorable and unique characters. You have the main duo of Judy Hopps (Ginnifer Goodwin) the never-give-up bunny cop and Nick Wilde (Jason Bateman) the …

Dream movies went for children don't need to have political messages, however when they do, they ought to either be inside predictable, or work through the disagreements in wording that children can apply to this present reality. "Zootopia," a dream set in a city where predators and prey live respectively in agreement, is an entertaining, wonderfully planned children's film with a message that it restates every step of the way. Yet, in the event that you consider that message for more than five minutes, it doesn't simply come apart, it welcomes a perusing that is definitely as opposed to the motion picture's apparently edified soul: segregation isn't right, yet generalizations are generalizations for a reason, and it is difficult for individuals from a scorned class to beat the reasons …

No posts have been made on this movie yet. Be the first to start talking about Zootopia!