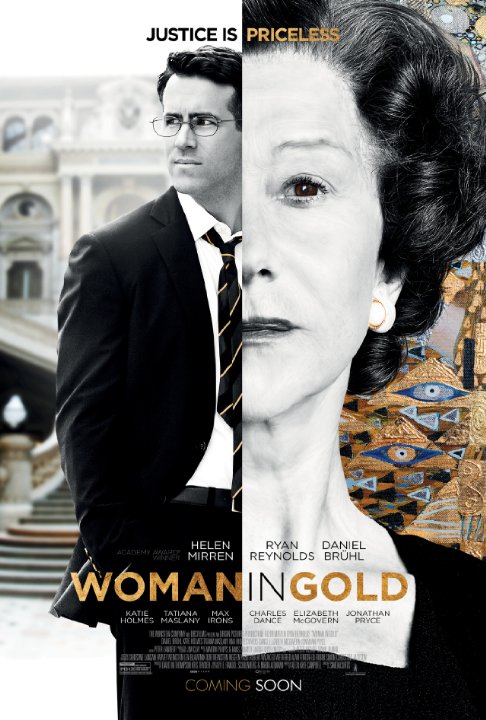 Plot: Sixty years after fleeing Vienna during WWII, a Jewish woman works with a young lawyer to reclaim her family's heritage stolen by the Nazis, including Klimtâs famous painting âThe Lady in Goldâ. -- Chris Kavan

Helen Mirren is outstanding, as always! I love the topic, where art, politics, and sentimentality converge.

Fascinating true story that is elevated by presence of Helen Mirren as Maria Altmann and, yes, Ryan Reynolds (who proves he can do drama as well as Deadpool) as a young lawyer taking on a massive international case. The modern-day trial to rightfully return a famous Klimt painting is juxtaposed with the growing Nazi threat in Austria (with Orphan Black star Tatiana Maslany playing the young Altmann). It is both moving and inspirational and certainly recommended.

"Mrs. Altmann, it would seem that if your case goes forward, world diplomacy will collapse, and you will be solely responsible."

"Woman in Gold" is a wonderful and sometimes touching film. Not because of the topic as this was already highlighted in "The Monuments Men", but because of the brilliant rendition Helen Mirren is showing here. A role that suits her perfectly. A distinguished elderly lady who's a descendant of a wealthy Jewish family and who was forced to flee to the United States during Austria's annexation with Germany. She left behind everything: family, personal things and valuable belongings that were owned by the family Altmann. The resentment towards the German ruler obviously is still as lively now as it was in the past. And despite her intention never to set foot on …

No posts have been made on this movie yet. Be the first to start talking about Woman in Gold!