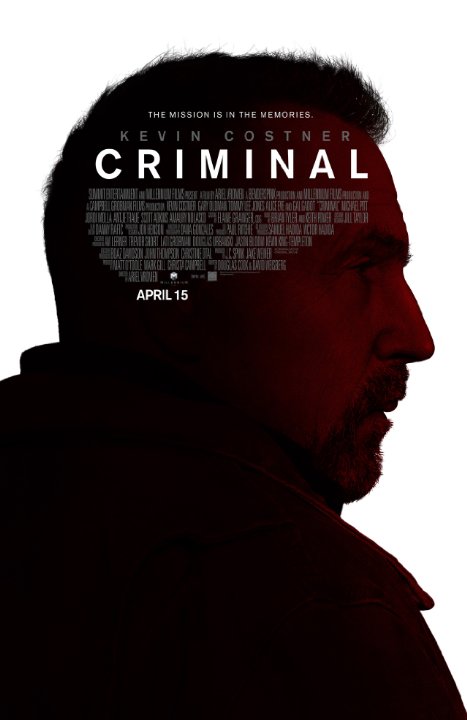 Plot: A dangerous and unstable convict finds himself with a new skill set when he is implanted with the memories and abilities of a highly-skilled and recently deceased CIA agent. -- Chris Kavan

How can a movie with a knock out cast and a good director like this somehow turn out so terrible and lifeless. Now that right there...is just criminal.

"I don't remember anything, asshole. You're confusing me with someone else."

Jerico Stewart (Kevin Costner) is a danger to society. He's locked up in a maximum-security prison as a chained wild beast. An unruly person without feelings. A psychopathic person who doesn't even know the difference between right and wrong ("You can't punish someone who doesn't know he did something wrong"). And this thanks to his mother's friend, who found out that he wasn't the father, and as a response flung him out of the window of the car. The result was a frontal lobe syndrome, making him the suitable candidate to inherit the memory of CIA agent Bill Pope (Ryan Reynolds), who was electrocuted to death during a mission. And this because the memory of Pope is full of information necessary to locate the …

"Criminal" - a better version of SELF/LESS

Criminal veers dangerously close to becoming a waste of time halfway through the story. Luckily it picks up near the end. The premise remains an interesting one. Suppose if we had this technology, a dead government agent's consciousness is transplanted into the mind of a ruthless convict in order for said convict to thwart a future terrorist attack. Gary Oldman asks the obvious question as to why " a death row inmate instead of a hero Seal Team 6"? Because it's more entertaining that way. Kevin Costner plays the lead antihero as a crude sardonic loner who is outright murderous at first. But it's interesting to see him change because of the implanted memories and traits from the deceased good guy (Ryan Reynolds). There is a surprisingly large number of recognizable actors in this for …

Criminal has all the elements to make a superb action/crime/thriller with a pretty impressive cast, a interesting story and a director who is no stranger to making the dark characters shine (with the 2012 film The Iceman). Despite having all the elements, Criminal never quite comes together as it should.

We open with agent Bill Pope (Ryan Reynolds in an extended and surprise cameo essentially) who has a bag of cash and is being pursued by both the CIA (led by a barking and scene-chewing Gary Oldman) and a more nefarious organization led by Xavier Heimdahl (Jordi MollÃ ) and his dangerous lap dog Elsa Mueller (Antje Traue). It seems Pope has knowledge of a talented hacker Jan "The Dutchman" Stroop (Michael Pitt) who has revealed he has managed to figure out how to break into the U.S. …

No posts have been made on this movie yet. Be the first to start talking about Criminal!