Now You See Me 2 Movie Information 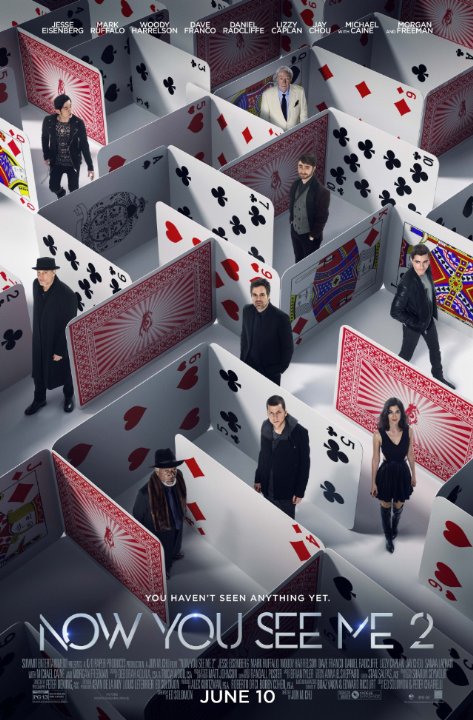 Plot: One year after their improbable and crowd-pleasing effort at outwitting the FBI, the magicians known as the Four Horsemen are brought back out of retirement. Their next act involves exposing an unethical tech magnate, Walter Mabry. But this prodigy isn't going to make things easy - presenting the group with their most impressive, and seemingly impossible, task yet. -- Chris Kavan

While the first one got by on energy and moxie alone, my only complaint was its ending. "Now You See Me 2" is more problematic, however, by being self-indulgently overstuffed to the point it becomes convoluted, preposterous, and inevitably delivering less when it clearly promises more.

I wish they titled it "Now You Don't". That would have been such a better title. NOW YOU SEE ME 2 is not as fresh and interesting as the first one was but it's still entertaining. Like the first movie, this is thanks to the cast and its sense of fun. Isla Fisher is missed but honestly Lizzy Caplan earns her keep as the new girl on the team. Daniel Radcliffe is a lot of fun as the bad guy.

Doesn't have as much magic as the first film, but is still a solid crowd-pleaser with a still-excellent cast. Lizzy Caplan is a more deadpan comedian than Isla Fisher and the addition of Daniel Radcliffe, while against type, is still a lot of fun. Watch it for the card-chip sequence and the final act (complete with plenty of twists). It's brief entertainment at best, but if you liked the first one, this second act is worth watching.

Flawed, but magical at times

This film definitely should have been titled, âNow You Donât.â Despite my bitterness toward this, I was looking forward to the return of the Four Horsemen this past May. And while this is not a well-made film, there is still a lot of fun to be had.

Led by illusionists Dylan Rhodes (Mark Ruffalo) and Daniel Atlas (Jesse Eisenberg), infamous magicians known as the Four Horsemen are back to entertain and thieve using their skills in deception and sleight of hand. Daniel Radcliffe also joins the cast as tech genius Walter Mabry, who forces the Horsemen to steal a chip that will give him control of all of the worldâs computers.

What made âNow You See Meâ so entertaining was the chemistry between the Four Horsemen and the energy they brought to each of their shows. A nice …

'Now You See Me 2' is the needless loopy sequel to the averagely entertaining, twist-filled magician caper/comedy from a couple years back. The first film was adequate; the absolute definition of a 'cable movie'. This 'second act' piles on the ridiculousness. The events that unfold require a much greater suspension of belief. Too much for me, personally. Silly twists pile on in a numbing amount. One significant twist (at the end) tries to emulate the final twist of the first by completely changing the entirety of a returning character. Everything he's about is flipped for the purpose of saying "gotcha" to the audience. It felt cheap. A surprise reveal of a pointless new character at the beginning forces an unnecessary annoyance on us from time to time. The plot, and actions of …

No posts have been made on this movie yet. Be the first to start talking about Now You See Me 2!