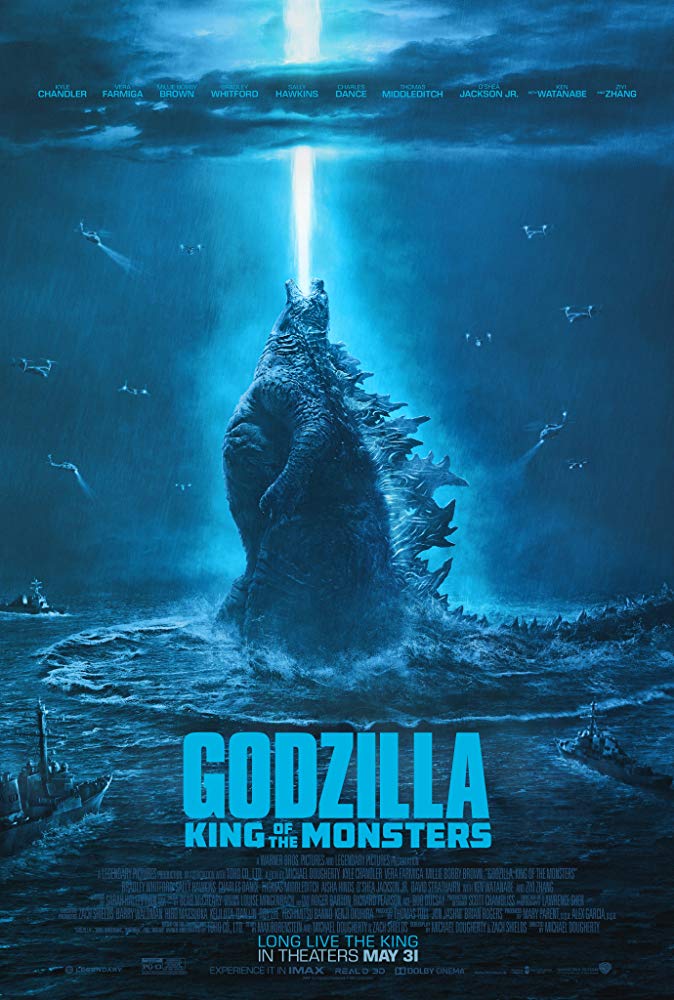 Plot: The newly-formed cryptozoological agency Monarch faces a challenge of monstrous proportions dealing not just with the emergence of Godzilla, but several god-sized monsters: Mothra, Rodan and the three-headed King Ghidorah. But as the beasts fight for supremacy, it is humanity that finds itself at greatest risk, caught in the middle of this battle with our very existence hanging in the balance. -- Chris Kavan

For a long time, I'm familiar with this Godzilla monster but I only got to see the 2014 film and now this. I must say, only after watching "Godzilla: King of the Monsters" I was really able to grasp its premise, and get to appreciate it. I also love the casting on this one; Millie Bobby Brown who we're used to seeing with different monsters in Stranger Things and Kyle Chandler who I remember the most in Super 8, which happened to deal with a monster/alien too. There were some questionable artistic decisions, but overall this was a good watch.

An "Avengers" team-up for the kaiju genre, "King of the Monsters" is the best kind of junk food blockbuster with plenty Godzilla (and other legendary beasts) to go around.

King of the Monsters - Review

'Godzilla: King of the Monsters' didn't work for me. Sorry guys. I'm gonna be the odd one to say this, but I thought this was incredibly boring.

I re-watched the 2014 version back in May in preparation for this movie and after five years since I've seen it, it still holds up. The scale felt so grand and the overall experience is so epic. It's a shame the same can't be said for 'King of the Monsters'.

People have complied about the characters in the 2014 version, but nothing compares to these planks of wood. Holy sh*t they are so one note. I honestly couldn't care for the whole family dilemma. At least we had Bryan Cranston that brought an emotional hook in Gareth Edwards movie. Heck, the characters in the original weren't too bad.

Godzilla is a great summer blockbuster - that doesn't mean it's a great movie, but that it essentially fills that spot you've come to expect over the summer: it's big, it's loud, it's fun and, yes, it's dumb. It's the WWE with giant monsters instead of sweaty dudes, with humanity being the destructible environments around them. The actual human characters are given a cursory role to play but, come on, you're here because you want to see big monsters fight it out and that's pretty much what you get.

The film starts with a family losing a son (and young brother) during Godzilla's initial attack. This causes a big rift leading to Dr. Emma Russell (Vera Farmiga) throwing herself into research for the secretive organization Monarch, hoping to understand the monsters - with her daughter, …

Godzilla 2 is cool but not king of the monsters.

GODZILLA: KING OF THE MONSTERS delivers spectacular kaiju action and mayhem, seemingly as an apology for the slow-burn reveal of the 2014 film. The ensemble cast seems aware that their gigantic CGI costars are the true draw of the film but they nevertheless take the proceedings as serious as need be. Ken Watanabe and Vera Farmiga especially have more gravitas than expected. The main plot where the monster agency Monarch and Godzilla race to thwart the awakening of other monstrous creatures is surprisingly gripping; there is a weird environmentalist angle that does sound nice but is negated by the villains. Yeah there's still human villains in this for some reason despite there already being a 500 ft three headed dragon. The cliffhanger ending is a treat for franchise fans. But it also …

My Say: Godzilla (2014) had a very surprising strong opening weekend ($93 Million), But do To audiences saying it was only okay and the widely acclaimed X-Men: Days Of Future Past out the next weekend, Godzilla suffered a very bad 2nd weekend drop and only ended up with $200 Million domestically. But as for King Of Monsters, I see it having slightly longer legs than &hellip;