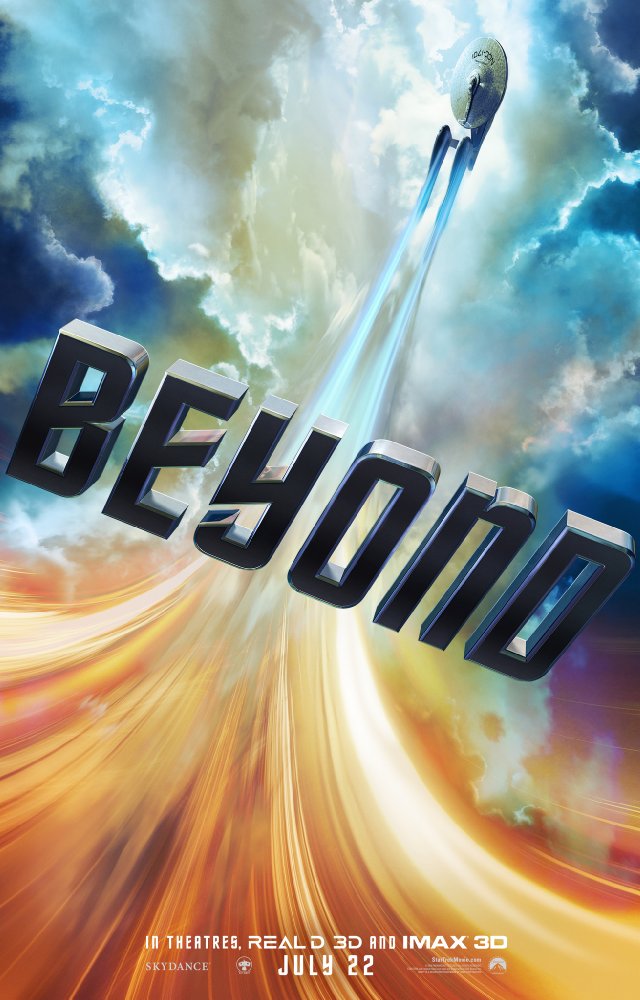 Plot: The USS Enterprise begins the first leg of its five year mission. Reaching the edge of uncharted space, the ship is nearly destroyed and strands Kirk and the crew on a remote planet with no communication. With everyone scattered, it will test the crew, and Kirk, like never before. -- Chris Kavan

A great movie full of good story, action, and special effects. Finally an original story for this era of Star Trek movies instead of the dreaded re-make.

My favourite film of this new Trek trilogy

3 years into it's 5 year mission, The USS Enterprise makes a stop at Starfleet's newest, most advanced starbase, Starbase Yorktown, when it recieves a distress call. Following the location of the call to Altamid, a class M planet on the edge of the Nebula, uncharted space, The Enterprise is destroyed by a swarm of drones led by a ruthless alien with a vendetta named Krall. With their ship destroyed and scattered all over Altamid, the crew of The Enterprise must get back together and team up with alien warrior Jaylah if they are to escape. Now, the first thing I want to say is that this is the most flat out fun film of this new trilogy, which also makes it my favourite, with the 2009 film coming in close second because of nostalgia and a great ensemble cast. The action scenes are fun and …

"Star Trek Beyond" by Yojimbo

The Enterprise is ambushed by a creature with a pathological hatred of The Federation and all it stands for, leaving Kirk and the crew stranded on an alien planet. My initial reservations about the Star Trek reboot mainly centred around its broad humour and reliance on superficial flash; something I felt was rectified by the darker themes and harder edge of the first sequel, Into Darkness. Unfortunately Star Trek Beyond feels very much like a step backwards in this regard. The opening sequence which played very much for laughs could easily be mistaken for an outtake from Galaxy Quest - which was in fact, rather funnier - and the breathless, comic strip action never pauses to give any of the central characters to breathe, never mind interact or share any meaningful dialogue. Idris Elba is …

It was painful to see the Enterprise going down

Although I've seen a considerable number of episodes of the television series Star Trek at a young age, I've never felt like a real Trekkie. It fascinated me, but not to such an extent that I'd greet everyone in my daily life using a Vulcan salute. When the next generation Star Trek episodes started (with the charismatic Captain Picard), I was even less interested and existence of this series faded for me completely. Three years ago I saw "Star Trek Into Darkness". And to my surprise this was already the 12th motion picture with the Enterprise still boldly going where no man has gone before. It really didn't blow me away. It wasn't so adventurous as in the television version where they repeatedly discovered new civilizations. Probably it has something to do with …

Justin Lin made the right decision signing on to direct this. Loved it, easily the most flat out fun of this new trilogy.

Not to quote Star Wars, but I'm quoting Star Wars: &quot;I have a bad feeling about this.&quot;

When the first Star Trek reboot came out , all the actors were new in the scene, growing with bit parts. Now, each are headlining their own movies. It is more expensive to make because of salary increases, but also more difficult to make because of scheduling conflicts. How can you get those same actors on the same set at the same time again? Maybe that's why the third movie in all trilogies seem weak compared to the previous two in the series. The actors are tired playing the same character, &hellip;

the trailer sucks, they ruined it