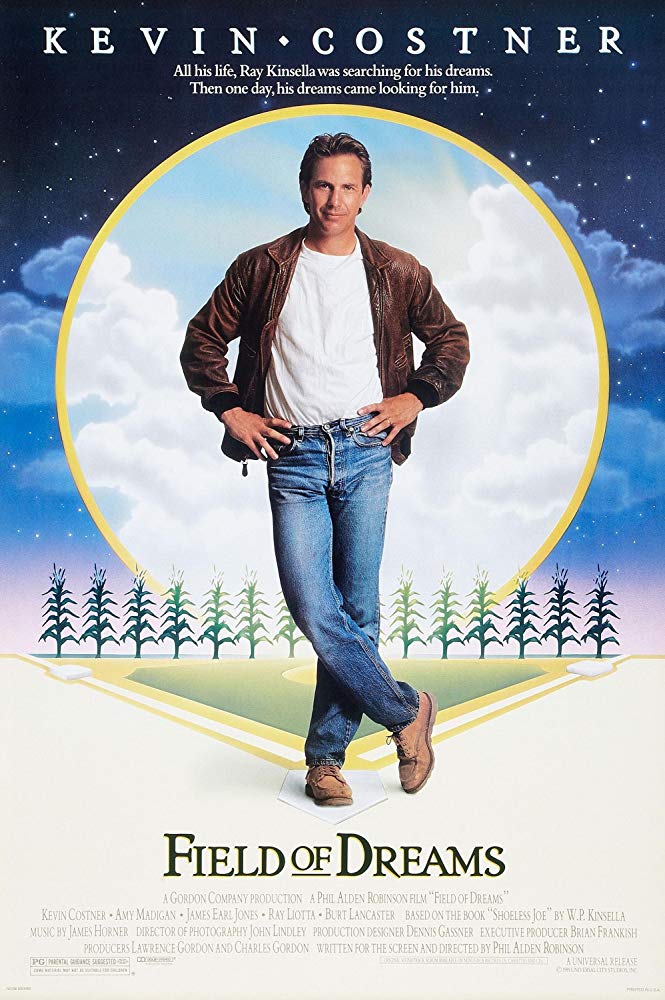 Plot: A man with a love for baseball, hears voices in his fields. When he is about to go bankrupt, his field turns into a baseball field and old players playing.

This big-hearted fantasy film set against America's pastime works thanks to an inspired, warm, and funny script.

Also known by it's snappier foreign language title "There are dead baseball players living in my cornfield". The ingredients of Kevin Costner and baseball should spell instant doom to anyone outside of the US of A, but it's actually a rather likeable little fantasy about finding your place in life and missed opportunities.

Although it's recognized as a classic, I couldn't get into the uneven and often corny storyline. The plot felt too coincidental and the stakes of the film never grabbed me. Granted, there are some great emotional moments towards the end of the film, but it definitely drags in the middle.

The film is about a vision that Ray Kinsella (Kevin Costner) needs to produce. I thoroughly enjoyed the flicks cinematography and screenplay. The only concern I have was Costnerâs dry performance (I guess he and Keanu are similar) and the main reason how Terence Mann (James Earl Jones) got invited. Amy Madigan did justice to her character Annie Kinsella, she was funny, smart and logical. Ray Liotta played it straight as well becoming Joe Jackson. The pacing of the story was good, actors portrayed their characters well and the theme is just universal. Some thought provoking lines: Dr. Archibald Graham â âYou know we just don't recognize the most significant moments of our lives while they're happening. Back then I thought, well, there'll be other days. I didn't realize that …

Build it and they will come!!

"All his life Ray Kinsella was searching for his dreams, then one day his dreams came searching for him." That was the tag line in the preview I saw for Field of Dreams in the spring of 1989.
I remember thinking 'that looks interesting'. I had no idea that what seemed like an 'interesting' little film would end up being one of my all-time favorites. Field of Dreams is an amazing illogical, fantastic journey that never seems to be going where you think it is. Rather than get distracted in trying to figure out what is going to happen (like I often do upon first viewing), Field of Dreams is one film where I was just content to sit back in wonder waiting to find out where Ray Kinsella (Kevin Costner) and I were being led to. The film wastes no time with set up and supposition. "If you build …

"Ray" (Kevin Costner) is an Iowan corn farmer who has regrets -- the biggest of which is fixing his relationship with his estranged father (Dwier Brown).

One day, "Ray" is in his cornfield, with his wife (Amy Madigan) and daughter (Gaby Hoffmann, in her motion picture debut) sitting on the deck of their home, he hears a voice come from out of nowhere say to him "if you build it, he will come."

After some thought on what the voice meant, he begins to believe that he has to tear down part of his cornfield and build a regulation baseball field. This causes what can only be described as the ghost of disgraced baseball legend "'Shoeless' Joe Jackson" (Ray Liotta), as well as other deceased players to come play on that field.

He then goes on a journey that takes him across the …

No posts have been made on this movie yet. Be the first to start talking about Field of Dreams!