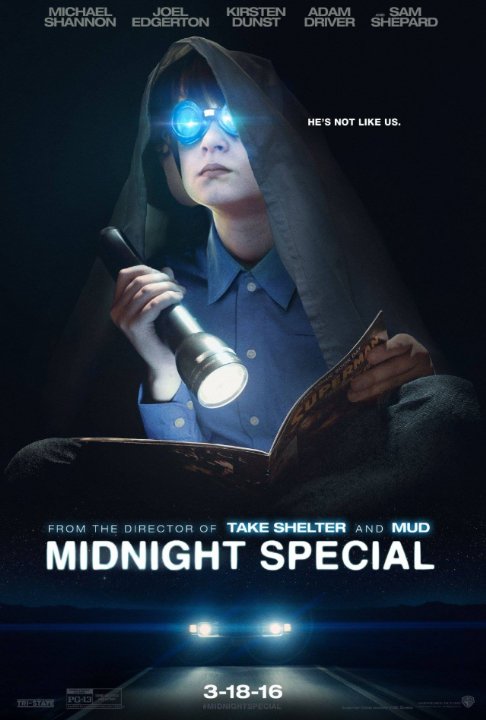 Plot: When a father learns his son possesses a unique power, one that could ultimately change the fate of the world, he will do everything to protect him, even as a dangerous religious sect and government task force doggedly pursue them. -- Chris Kavan

"Midnight Special" combines sci-fi adventure with mystery, as well as some interesting ideas, and manages to balance them pretty successfully.

While you think of most sci-fi films as full of action and aliens, Midnight Special is thoroughly grounded, relying on captivating characters and a deep mystery to keep you enthralled. Michael Shannon proves, once again, he is one of the best actors out there while the young Jaeden Lieberher is excellent as his son with some interesting powers. It moves slow, but stick with it - even if the end might not quite satisfy all expectations.

A young boy with supernatural powers is abducted by his father and they make a dash for a rendez vu with they-know-not-what based upon nothing but intuition, with the authorities and a cult-like church community in hot pursuit.

Midnight Special is the kind of earnest concept sci-fi that always reminds me very much of cult TV show The X-Files. The set-up is very similar, with a duo of a âbelieverâ partnered with a law enforcement officer who brave adversity in the shape of âThe Manâ who is desperately trying to stop them. And like The X-Files it is tense, intriguing and compelling during the bulk of the story. And like The X-Files, the âexplanationâ at the end contains more questions than answers and as such is perplexing, frustrating and rather unsatisfying.

'Midnight Special' is one of the most intriguing sci-fi films of the year. Writer/director Jeff Nichols brings us a tightly wound plot with interesting characters and a captivating mystery at it's core. It's paced slowly, with each new reveal laid out in natural progression. We are dropped into the middle of the situation, learning bits of information continuously. It feels both smart and adult, but also captures some of that childlike wonder present in the types of films that it emulates. The presence of opposing forces and a countdown clock gives a constant sense of urgency and danger. I like the ambiguity of the finale, but with the entire film essentially being build-up the final destination was not as satisfying as I'd hoped. Kind of a typical confusion for this type of film. …

"You all have no clue of what you're dealing with, do you?"

Fascinating. Intriguing. Mysterious. Captivating. These are words that crossed my mind after watching this quirky SF. "Midnight Special" seemed to be nothing special. But at the same time it contains something special. The atmosphere of secrecy that is noticeably present from the beginning, creates an intensely long trip full of mystery and intrigue. That underlying tension will resonate for a long time until the final offensive deploys and all questions are being answered. But believe me, most of the time you'll be sitting perplexed in front of your screen, while wondering what the hell is going on.

The strength of the film is the way in which they reveal as little as possible. The story unfolds itself painfully slow. Roy …

No posts have been made on this movie yet. Be the first to start talking about Midnight Special!