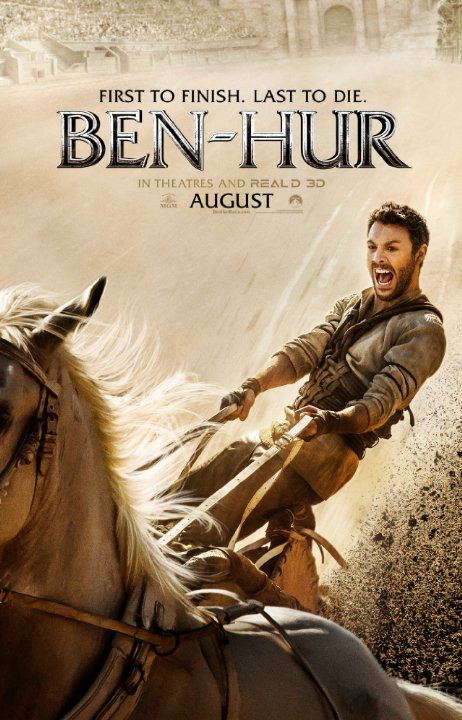 Plot: A Jewish nobleman finds his family ruined after being falsely accused of a crime and betrayed by his friend, a Roman. After surviving years as a slave, he rises from the depths and vows revenge for his betrayal. -- Chris Kavan

Remaking Ben-Hur? Now that's the studious first big mistake, and the payoff shows. Oh and I haven't seen the original movie, so...there's another reason to dislike me.

Ok. I haven't seen the original (which people think should not have been remade) but I really like this. Call me religious or whatever, but the reveal in the end, how this is bigger than a story of two brothers, really got me. To be honest, I felt really off when it comes to the cinematography, production design, even the story in the beginning. But things were forgiven towards the end. I believe that the circus scene is well-shot and the intensity was really there. From that point forward, everything makes sense. This is a film that catholic high schools should be showing to their students. Enough action, enough drama, and a big lesson about Jesus' time. Of course it does not surpass Mel Gibson's The Passion of Christ, but this is definitely a decent attempt of putting Jesus' teaching …

Much Less Epic than It's Inspiration

'Ben Hur' is the remake of the classic epic that no one asked for. Honestly, Charlton Heston's version of this story looks and feels way more epic by comparison. What we have here is a truncated retelling of that film's narrative with minor touches that serve no purpose to plot or character development. It cuts through the core brotherly relationship, and all other relationships, with a scalpel, leaving us without much to invest in. The actors are all trying hard to be compelling, but the compact nature of the film squeezes out some of their effort. They are all giving what appear to be "good" performances. In this case, it seems like a waste. The parallel between the hero and Jesus is just present as background this time. He learns of forgiveness from witnessing the kind acts …

No posts have been made on this movie yet. Be the first to start talking about Ben-Hur!