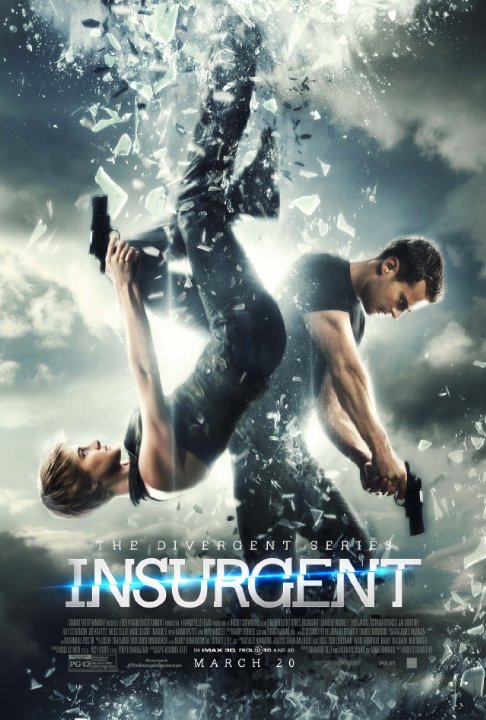 Plot: When Beatrice 'Tris' Prior found out she was Divergent, it changed everything. Now the factions and their chosen ideologies are growing closer to war - and the choices made will have far-reaching consequences. Loyalties and relationships will be tested and if Tris chooses to embrace her Divergence she may gain an identity - but lose far more than she could imagine. -- Chris Kavan

the only reason i'm giving this a 2.5/4 is that at least the ending made me want to see the next episode.

Picking up where the first film left off (but with all that exposition now out of the way) the Divergent series continues to be a decent, if somewhat bland, YA adaptation. Tris (Shailene Woodley) and Four (Theo James) are hiding out after the destruction of the Abnegation faction by the Erudite as ordered by Jeanine (Kate Winslet). But Jeanine has a new plan - and it requires a special Divergent and guess who that happens to turn out to be? I hear this deviates quite a bit from the book (making many fans angry) but I still thought it was pretty good on the action and emotional front. A pale imitation of The Hunger Games, but still worth a watch.

'Divergent' was an okay distraction which was upheld by some good acting and directing. This is a very unremarkable series that doesn't have any original ideas, as it feels like a stale combination of many other 'young adult' book series turned movies - most notably 'Hunger Games'. Not enough to be considered a rip-off, but every single beat feels all too familiar. This sequel furthers the over-arching story by a single inch. It's mostly a faster-paced complete retread of the narrative of the first. No real progression is made, nothing new at all worth investing in. It's just kinda dumb. A low-level entertaining type of dumb. The slick action and editing, and Woodley's continued commitment, are the only things holding this together.

At least this was a bit better than the first part

I really start hating those damn different film versions of children's books. They are always spread over several films so you always have to wait a year before you can see the sequel. Similarly this sequel to "Divergent". I could still partially remember what it was about, but the first 15 minutes I was actually systematically trying to reconstruct the previous film. It would be best to watch the previous movie once again before you start a sequel. But then again this happens never due to the lack of time. And then, to know that the last part of the sequel is again divided into two films, and that for the obvious reasons. Let's hope that my biggest fear won't come true, namely that we'll be overwhelmed by …

Trying to hard to be the next Inception

The story to Insurgent is about the stakes for Tris as she searches for allies and answers in the ruins of a futuristic Chicago. Tris (Woodley) and Four (James) are now fugitives on the run, hunted by Jeanine (Winslet), the leader of the power-hungry Erudite elite. Racing against time, they must find out what Tris's family sacrificed their lives to protect, and why the Erudite leaders will do anything to stop them. Haunted by her past choices but desperate to protect the ones she loves, Tris, with Four at her side, faces one impossible challenge after another as they unlock the truth about the past and ultimately the future of their world.

No posts have been made on this movie yet. Be the first to start talking about Insurgent!