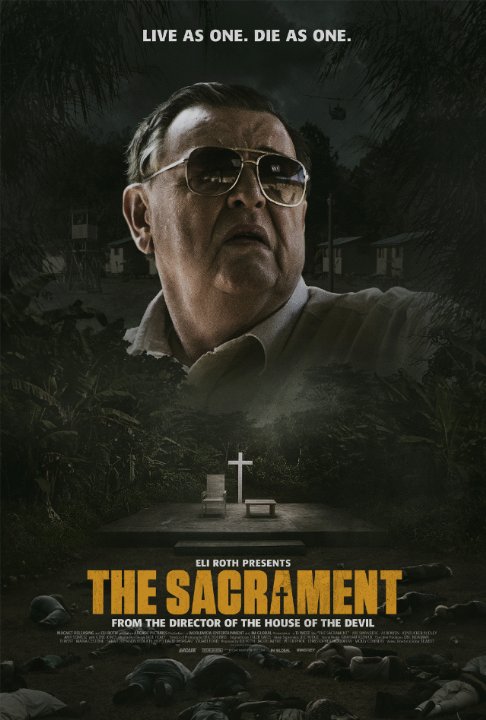 Plot: A pair of Vice Media reporters, along with a photographer looking for his estranged sister, travel outside the U.S. to an isolated utopian group ran by an elusive man known as "Father". At first skeptical, the group begins to come around, until a dark turn has them hoping to not just escape with the truth, but their very lives. -- Chris Kavan

While I think real life is much more frightening than any horror movie can ever capture, The Sacrament tries its best to relate to the horror that was the Jonestown Massacre. It's interesting to see the film morph from an initial "creep hippie vibe" onto full-on suicidal cult and "The Father" is truly a more frightening figure than Freddy or Jason could ever be. Ti West usually disappoints me and while this isn't a home run, I liked it a little better than his other forays into the so-called "mumblegore" genre.

The 'found footage' angle doesn't work here because there's always a feeling of staged direction with most shots. The film isn't immersive in the least. It's hard to put yourself in this situation when the story leaves illogical gaps. That's a problem with most in the found footage genre. Others have called 'The Sacrament' a 'slow-burn', despite the fact that it's quick, short, and very direct. This allows for a predictable build-up to a finale that doesn't have the punch intended. There are the makings for good ideas present. The writing and execution leave more to be desired.

the father has spoken.

A truly chilling take on the Jonestown massacre. Ti West's latest is one of, if not his best, feature to date. Once again taking the slow-burn approach, and yet way more involving and increasingly creepy than his other films. This piece of pure cinema mixed with "faux-real footage" is by turns shocking, deeply unsettling, and suspenseful. The final 40 moments alone are brilliantly nightmarish and realistic, but the entire film is never once boring. The cast is strong across the board, especially Amy Seimetz and Shawn Parsons as Father. Many (most made for tv) films have taken on the Jonestown tragedy, but none have come so close in evoking the deeply embedded dread and tragedy in equal measure. A queasy good time and Ti West's further proof that he just keeps getting better. The …

No posts have been made on this movie yet. Be the first to start talking about The Sacrament!