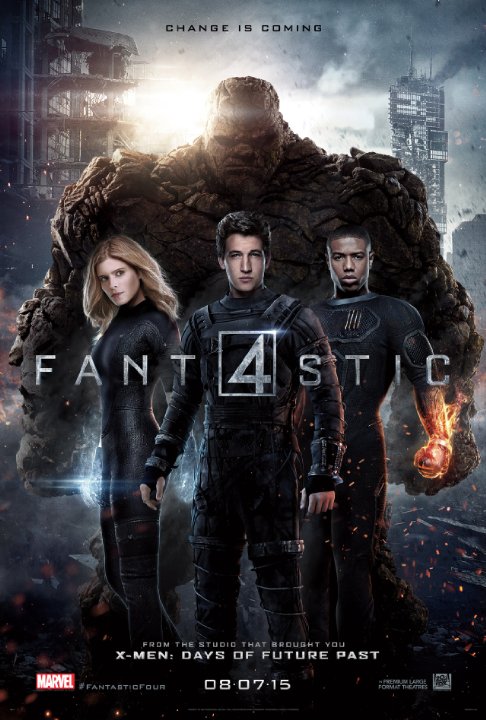 Plot: A contemporary take on the classic super-hero team - four young scientist are involved in an experiment where they find themselves teleported to another dimension. When they return, they find themselves gifted with unique powers - ones they will have use to stop an evil rising to power. -- Chris Kavan

Focuses for WAY too long on its heroes' origins rather than developing them with a good story. There is little to call 'fantastic' about this movie.

The newest film version of the famed superhero team is so poorly directed, acted, and filmed that it will most likely be the last adaptation for decades. It would be on par with other notoriously bad superhero films like Batman&Robin, Steel, Catwoman, Green Lantern, Elektra, and Spawn except for one thing. It is completely lacking in ambition or energy with those other films had in abundance. The color palette is dark and drab; the story has very very little action; and the cast either tries too hard or they're boring. It's one of the dreariest and most uninteresting wannabe blockbusters in decades.

Honestly, they need to stop trying to make a decent Fantastic Four adaptation. Despite an impressive cast, Josh Trank dropped the ball on this one and it's a complete mess, just as bad, if not worse, than the 2005 mess. Unless you are a superhero completist, skip this one and pretend it never existed in the first place.

"Where'd the rocks come from? From the same place the car went to. Where is that? I don't know yet."

During my youth I spent many hours next door with the neighbor boy. Not just for having fun or horsing around, but also because in their veranda there was a disused closet with sliding doors where you could always find some old comics lying around. I suppose these were from the older brother who was a real comic fan. Many hours I spent sitting in front of that closet, reading them all. Comics like "Archie the man of steel", DC comics and of course Marvel. My favorite was "The Fantastic Four". This series I found extremely fascinating and that because it was a collective, consisting of several superheroes with different super powers. They formed a close-knit family and their identity …

Fantastic Four (2015) PG-13 Four young, brilliant teenagers are brought together to create a machine that can transport people to an alternate universe. The machine will change their lives in dangerous ways. This is the best Fantastic Four film made, but of course, that isnât saying much. This is a reboot and an origins story, which is part of the problem with this film. It takes forever to get started, much of the film takes place in a laboratory. While the first portion is slightly compelling, I think that itâs mostly due to the strong cast, led by Miles Teller and Michael B. Jordan. The biggest problem with this film is we really donât meet the villain of the movie, Doom (Toby Kebbell), until 20 minutes left, and the ending feels kind of rushed. This film never really …

Another attempt at a 'Fantastic Four' movie. It's surprisingly the worst yet. For starters, one could barely even consider this a Fantastic Four movie. The character names and power-sets are pretty much the only things replicated from the well known comic property. A brand new origin, and an overhaul in tone, are on the agenda. It's dark for the sake of it. The most serious demeanor is carried through as the group's transformations are treated like that of BrundleFly's in Cronenberg's remake of 'The Fly'. I kid you not, the second half is a complete B-rate sci-fi horror flick that has more gruesome images than any non R-rated movie I've seen in a long time. What's worse is that this dark serious tone is offset by random stupid lapses in logic and a few lines of truly cringeworthy …

After Chronicle a lot was expected. But there was a lot of studio inteference and Actor-Director disputes. So hard to say its only the director's or write's fault

It had all the potential to be decent, but I agree - there is almost no redeeming qualities. It's so bad, I forgot to review it until now - probably because I really wanted to forget about it.

This movie sucks so bad

To be honest, the trailer wasn't that bad, but it did look kind of cheesy. But I wasn't expecting critical reception to be as bad as it was either.

I'm not entirely sure if I should watch this, even Pixels was better received than this. And that's not a good sign when an Adam Sandler movie is received better than a Fantastic Four reboot that no one asked for. But yikes, I wasn't expecting it to be THAT poorly recieved