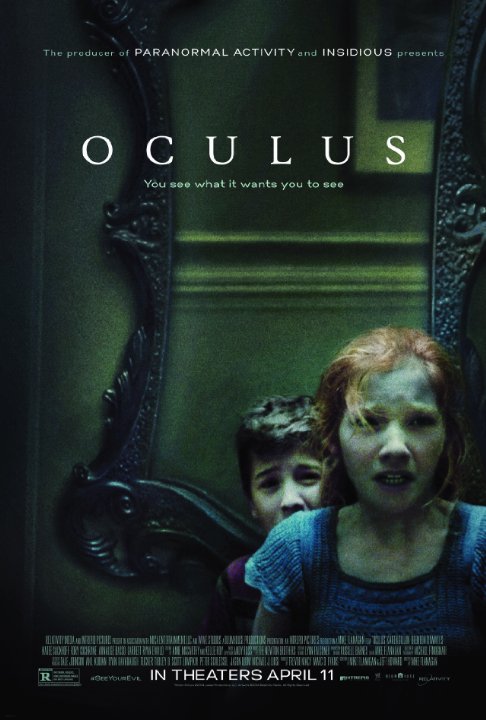 Plot: Convinced her brother is innocent of the murder he is accused of, a women sets out to prove who the real culprit is - a supernatural entity in the form of an antique mirror. -- Chris Kavan

One of the most interesting and well-made horror films I've seen in ages. Although the ending felt fairly unambiguous, I loved the way the story presented different narrative possibilities all overlayed on each other. Like watching each chapter of Rashomon simultaneously.

Creepy horror movie that gets a little too trippy for its own good - but it still did an excellent job of balancing the traditional "jump" scares with a nice dose of psychological horror. Though the young adult leads were a bit of a bore - it was still overall a better horror film than I was expecting. Not quite The Conjuring, but for a year where horror has been lax, it stands out as one of the better offerings. Watch with the lights out and the sound up - and don't look behind you...

Ten years ago, tragedy struck the Russell family, leaving the lives of teenage siblings Tim and Kaylie forever changed when Tim was convicted of the brutal murder of their parents. This movie may have ripped off the 2008 film (mirrors) But this movie was creepy and chilling to watch.

Halloween night. All channels are stuffed with horrors to entertain you during this scary night. Unfortunately these are always the same recurring well-known movies (I'm sure the budget of the Film Department isn't that big). Best I choose one from the seemingly endless list of never watched horror movies. And I always wanted to watch "Oculus" (despite some negative comments I've read). And I must say, I was still pleasantly surprised. Not because of the horrifying or frightening content since that part was almost missing completely. But it was because of the ingeniously interwoven story lines from the past and the present that fascinated me. Although …

Not Your True Reflection?

'Oculus' is the first new mainstream horror film released this year that is not genre typical. There are supernatural causes at work, but the journey is one of psychological involvement. The main plot device of this mysterious mirror is used effectively in messing with the minds of the characters and also the expectations of the audience. Everything about the mirror is kept as vague as possible. Only it's body count and effect on humans is shown. Often we experience the mind tricks being played on the characters. Scenes play out one way then reverse to show the real event. The familiar scenario frequents to the point where we are not at all confident which part of what we saw actually happened and which was the ruse. These moments are very effective at keeping one's interest …

No posts have been made on this movie yet. Be the first to start talking about Oculus!