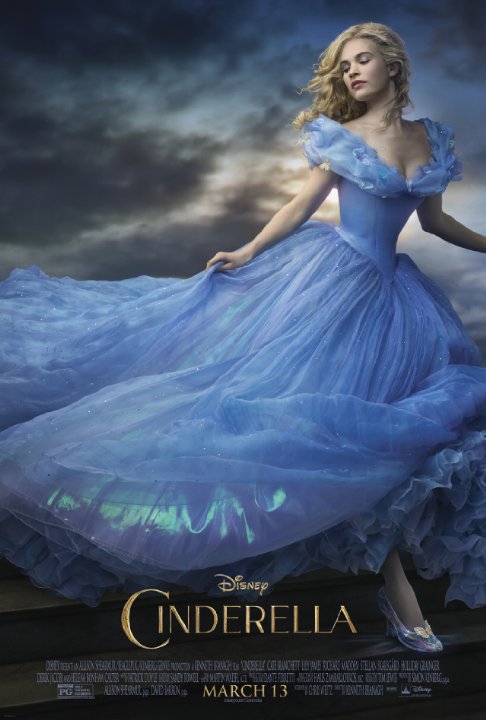 Plot: Following her mother's death, Ella's father remarries and, in order to please him, she does everything to open herself up to the new family. But when her father dies suddenly, her step-mother and sisters waste no time in turning her into their personal servant, rechristening her "Cinderella", as she is always covered in ashes after cleaning. Even with the cruel treatment, she lives by her mothers words to have courage and treat everyone kindly. A chance encounter in the forest will turn her life around - even the meddling of her wicked step-mother cannot stop her destiny. -- Chris Kavan

Although far from a magical masterpiece, this live action version of the animated classic has its heart in the right place.

Even though Kenneth Branagh's film doesn't quite bring anything new or different to the table other than the extraction of vests from Cinderella's mice buddies, this retelling of the classic story is a film of astounding beauty. The production and costume design, visual effects and original score are all top notch and add much heft to the viewing experience on its exterior. In terms of story, "Cinderella" offers the same, engaging story everyone knows and loves with talented actors and filmmakers at the helm, who truly do justice.

Kenneth Branaugh's live action remake of the Disney classic is a tasteful and sometimes even touching romantic fantasy that thankfully pays loving respect to the original animated film. Often we have seen such remakes try to cynically rehash the basic premise of a given fairy-tale and transform the princesses in the stories into a superhero or whatever and it doesn't work. Although I'll admit that I liked Snow White&the Huntsman, sometimes it's better to tell stories the old fashioned way. That's why we love them.
Lily James is perfectly cast as Cinderella. She's kindhearted and compassionate to a fault-as I'm sure some feminist critics might level at this movie. She suffers hardship after hardship but does not reduce herself to accept the harshness of life and renounce the virtues …

Disney is on the path to adapt most of their animated classics into live action form. The first two attempts, to me, were abysmal. They were re-imagined versions, showcasing the beloved characters in new altered stories. Those stories were terrible. Thankfully, this new 'Cinderella' does the opposite. It's a faithful retelling of it's animated counterpart. The story/plot stay the same, while many minor changes/additions are thrown in. These tweaks flesh out the characters, making them more relatable and endearing. I was surprised by the adult manner in which the relationships were handled. The actors are well cast. Lily James is perfect as Cinderella. The set design and costumes are gorgeous. CG is used much more sparingly. It feels mostly authentic. It's everything a grand …

No posts have been made on this movie yet. Be the first to start talking about Cinderella!