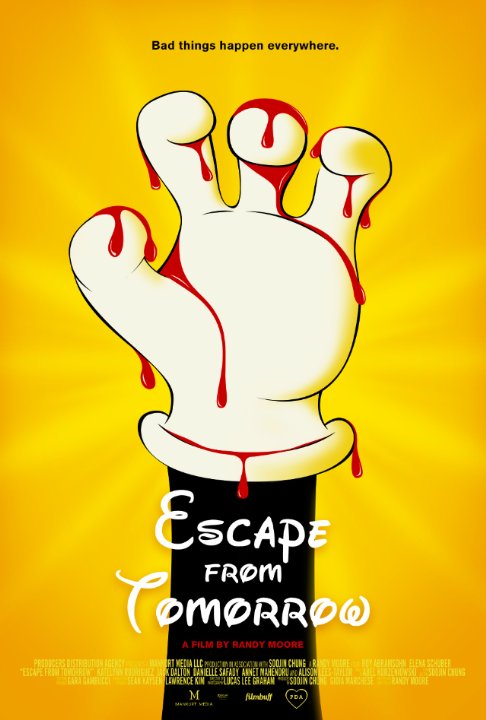 Plot: Shot guerrilla-style (and without permission) in Disneyland and Disney World by director Randy Moore - Escape from Tomorrow follows family man as bad news causes him to slowly lose his sanity and the magical theme park gets a dark makeover in his eyes. -- Chris Kavan

Surreal guerrilla filmmaking (with unauthorized footage of actual Disney themeparks) that has a few interesting visual touches, but overall just feels like a series of somewhat disjointed threads - a father falling apart takes his family to the theme park, finds himself entranced with a couple of French teens, gets drunk, has a fling, learns some strange truths and has a bad day. I love the black-and-white, but it's a bit too out there for my taste and is more of a novelty than a serious film to me.

DisneyLand, the land of dreams to come true right in front of your eyes, and your nightmares too.

The film is about a middle-aged American husband and father of two learns that he has lost his job. Keeping the news from his nagging wife and wound-up children, he packs up the family and embarks on a full day of park hopping amid enchanted castles and fairy tale princesses. Soon, the manufactured mirth of the fantasy land around him begins to haunt his subconscious.

Escape from Tomorrow is one of those films that you have to wait about two days after seeing the film, to get all my thoughts of the film to come together it's basically like solving a jigsaw puzzle. I tried my best to dissect the hell out of this movie by it's story, it's different and new style and the movies …

Escape from Tomorrow is a movie I respect more then I enjoy. The movie took a lot of hard work and care to make, because they had to go and film in Disney World and Disneyland with heavy equipment without getting caught. Writer/Director Randy Moore clearly believed in this movie a lot, and went to great lengths to get it made.

It really is a shame, knowing that this movie was made with so much passion and hard work, that itâs not that great. I wouldnât call it bad, but there really arenât enough ideas here to justify making a feature film. The first two thirds of the movie are pretty much just exposition setting up the bizarre surrealism of the third act; Nothing really happens for the first big chunk of the movie, and it becomes kind of grating after a while. The movies …

A surrealist horror film with the intent of satirizing the Disney corporation. I feel it only halfway succeeds on both fronts. The story is plainly simple; family of four on vacation at a Disney theme park and strange circumstances occur. I wouldn't want to say more, for giving away what happens, but little does happen. Besides a few 'surrealistic' turns, there's not much going on in this whole movie. I liked the directing style and certain individual scenes. Some of the comedy and wacky horror works. The gimmick/potential controversy surrounding the film is that is was shot on location in both Disney American theme parks (California and Florida) without the knowledge of those in charge. That is partially true. Barely half of all shots are inside the actual parks. The rest is …

No posts have been made on this movie yet. Be the first to start talking about Escape from Tomorrow!