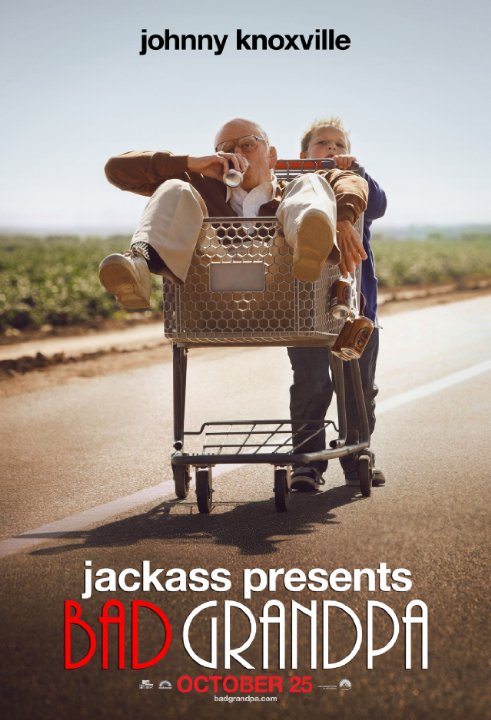 Plot: In this hidden camera road trip odyssey the 86-year-old Irving Zisman (Johnny Knoxville) takes his grandson, Billy across this great America where he will take child care in a whole different direction: male strippers, biker bars, beauty pageants and funeral homes. It's real people in unreal situations as only Jackass could bring you. -- Chris Kavan

Although it would work better as a Youtube video than a movie, "Bad Grampa" is disposable but entertaining.

It had its moments for sure, but overall it was simply OK. The film did have an actual setup unlike the previous Jackass films (a grandpa reuniting a boy with his no-good father) and, of course, Johnny Knoxville made him the dirtiest old man possible but it's really Jackson Nicoll who makes the film, because there's nothing quite like an earnest kid speaking his mind. Overall enjoyable but not as many laughs as I was hoping for.

'Bad Grandpa' follows the same movie-making format of 'Borat'. That is, a comedian playing a fictitious character and pulling pranks on unsuspecting real life bystanders, all based around a loose plot. Like 'Borat', the antics reach surprising hysterical levels. There's a fun-loving crassness to the jokes. They are crazy over-the-top, but never feel too gross. I'd be lying if I said I didn't laugh hard throughout most of it. The situations are funny to begin with. Add the physical and improvisational talents of Knoxville and young Jackson, and the comedy reaches greater heights. The 'Jackass' crew have outdone themselves this time. I got more than my fair share of laughter.

Worst All Time by Cassie

I had high expectations&amp;nbsp;going this movie. I grew up with Jackass on MTV and must admit I still have an immature side which enjoys fart jokes and scat humor. This flick had&amp;nbsp;a few&amp;nbsp;moments of pretty funny gags that seemingly come out of no where (i.e. the element of surprise). The golf fish, the folding bed and the explosive diarrhea are the funniest parts of the movie the rest was just filler. Knoxville should leave the inter-spliced reality- scripited type movies to Sacha Baron &hellip;

seen this movie yesterday ..absolutely loved it !! Very funny laught&amp;nbsp;during the hole thing ..loved that its&amp;nbsp;not just back to backpranks but&amp;nbsp;the&amp;nbsp;its a actual storie line and&amp;nbsp;has great&amp;nbsp;scenes would watch again for sure !! &amp;nbsp;