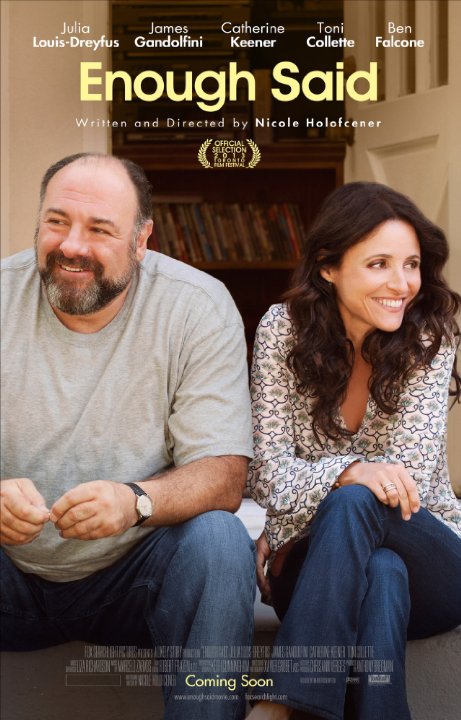 Plot: A divorced woman thinks she has finally found a new man she can share her life with... the only problem is he turns out to be the ex-husband of her new friend. -- Chris Kavan

James Gandolfini, in one of his final performances, is absolutely spectacular as the charming and heartfelt Albert, especially in the many scenes he shares with Julia Louis-Dreyfus' Eva. Their relationship is so beautifully written and developed, and their performances add warmth and comfort to the atmosphere even in the most uncomfortable situations. At first glance, I really didn't expect much from Enough Said, but it's one of the most engaging, touching, and surprisingly moving offerings I've seen in 2013. One quibble I have with the film is that it occasionally gets confused whether it wants to be a serious drama or a comedy - but that's just a minor complaint to be made about an otherwise tremendously effective film. 3.5/4

"You all knew James Gandolfini the actor. I was lucky enough to know Jim the man for 10 years as his close colleague and his pretend life partner, and for many more years as his friend. And itâs Jim the man, the very dear man, that I will miss most of all." - Edie Falco at the Emmy's for James tribute.

The story is about a divorced woman thinks she has finally found a new man she can share her life with... the only problem is he turns out to be the ex-husband of her new friend.

Enough Said is a lot different then I expected it to be before seeing the film. I was expecting the same romance cliche movie with the long fallout and the women or man start to feel bad and towards the end they both realize that they idiots so they get back together, riding off into the sunset. Enough …

My trips to the cinema 2013 by Maxine the Movie Gal

No posts have been made on this movie yet. Be the first to start talking about Enough Said!