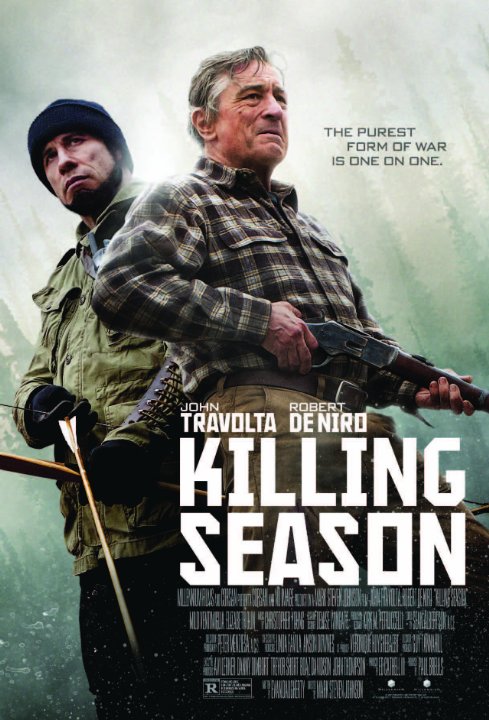 Plot: A remote area in the Smoky Mountain region becomes a showdown between two veterans of the Bosnian War - one American, and one Serbian. -- Chris Kavan

The Director of predator and die hard was meant to direct this one but that didn't happen. This movie is really Bad, I mean oh my god John Travolta acting in the movie is so laughable Bad.

"Hunting. I am going hunting"

"Killing Season" is like going to watch a charity match between John McEnroe and Bjorn Borg, two well-known stars who have a lot of achievements on their palmares and normally guarantee an exciting confrontation. Only you notice after some time that it's no longer the same as in their heydays. There's no punch in them anymore and they do their best but it's with a certain degree of unwillingness. It starts to look like a relay event and not a tough competitive match. The advantage tilts from one party to the other just to keep the tension high and eventually end the game in a draw to make it sporty and to satisfy everyone: the public, the sponsors and their own physical shape. It was something everybody was enthusiast and excited about, ultimately it …

It shows the history of more than 200,000 people killed due to genocide in Bosnia. The plot revolves round Colonel Benjamin Ford (Robert De Niro) and ex-Serbian solider Emil Kovac (John Travolta). Chris and his family visits his father in the cabin. Both meet when Ford's car breaks down and Kovac lends a hand. It's a film that reminded this rater between Castaway, Deliverance and The Hunted. More of an art film with a pretty good message about the effects of war. Not sure why they casted Travolta with an accent than acquiring somebody who is a legitimate Serbian, We see a healthy pumped up aged D De Niro who puts on his serious face. Soundtrack was leaned towards Johnny Cash and the family of Ford non-existent in the film. Some of the dialogues were repetitive. Highlights were …

No posts have been made on this movie yet. Be the first to start talking about Killing Season!