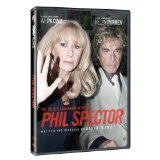 Plot: Explores the relationship of music legend Phil Spector and his defense attorney Linda Kenney Baden while he is on trial for the murder of Lana Clarkson. -- Chris Kavan

"I invented the music business." A movie on the life of an eccentric record producer, songwriter and musician Phil Spector (Al Pacino) and Linda Kenney Baden (Helen Mirren). Spector tells Linda about trivia's on Lawrence of Arabia, John Lennon, a song, Black American artists and the like. She represents him as a lawyer due to a suspected murder. The examination of the case felt like an episode of CSI. Spector insists his greatness in the influence of the music business. Al Pacino brings in his A game, showing his earnest portrayal. Linda - "You can control your behvior." Phil - "What your doing Linda is good." "You gotta take care of yourself." Mirren was a perfect compliment to the greatness of Pacino. She totally controlled the temperamental Spector. Soundtrack obviously …

The Films of David Mamet by Sebman

Movies I Want To See by Kathleen

No posts have been made on this movie yet. Be the first to start talking about Phil Spector!