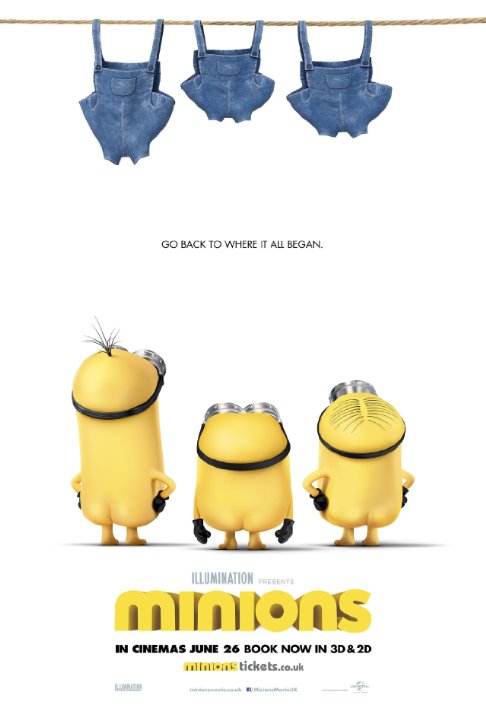 Plot: Just who are these Minions? The little, yellow creatures have always attached themselves to the most ambitious, powerful supervillain with one mission - serve them with all their might. But when the masters are killed, the Minions find themselves without a purpose and thus go into a self-imposed exile. After years, the Minions finally return and in the 60s attends a supervillain conference where they hope to find a new master - and the first female supervillain Scarlett Overkill seems to be the obvious choice. -- Chris Kavan

Pretty Disappointing Minions is not a bad movie in the slightest and is not the disaster everyone says it is (The Emoji Movie is a trillion times worse, Trust me), However, Minions felt like a missed opportunity with a script that is pretty messy. The humor does hit most of the time, Though not as strong as the first two Despicable Me films, and the animation is great once again. Minions is at times fun, But wasn't as good as it shouldâve been. Rating: Rotten

The Minions are cute and funny characters, but they're too one-dimensional to save their own movie from thin and inconsistent writing.

not the worst just dont expect despicible me

You have already seen these tiny little creatures in the movie Despicable Me.

However this movie is kind of a prequel to Despicable me from Minionsâ point of view.

Do not miss the start of this movie at any cost. The first 5 minutes sets the tone of movie.

The journey of minions has been excellently shown for us to understand why they embark on a journey to find a Villainous boss.

What happens next is 90 mins of fast paced fun and cat and mouse chase between the minions and the super-villain.

The animation is outstanding and storyline up to the mark. There are no dull-scenes as the editing team seems to have done their job brilliantly.

Good thing about this movie is that you are …

Minions may be aimed at a younger crowd, but I still found plenty to enjoy in the escapades of everyone's favorite little, yellow chaos-causing Minions. Plus, considering most of the film is spoken in a wild mix of English, Spanish, Indonesian and straight-up gibberish, it's no small feat you can get an hour-and-a-half out of it and still feel like nothing was filler.

Minions starts off at the beginning - the way beginning - as we see single-cell Minions evolve into our pill-shaped friends we know and love. Their goal is simple - always follow the biggest, meanest most evil guy around... well, unless they happen to cause their untimely demise. Dinosaurs? Check. Neanderthals? Check Egypt? Check. Napoleon? Check. But eventually they finds themselves alone and bored - until one brave …

No posts have been made on this movie yet. Be the first to start talking about Minions!