Night at the Museum: Secret of the Tomb Movie Information 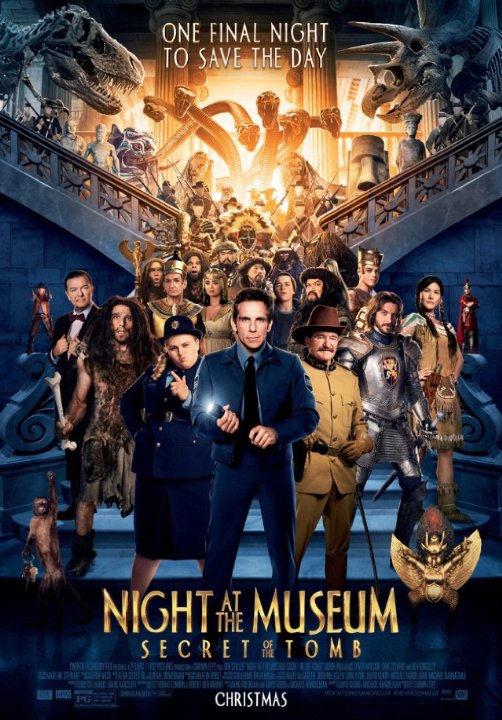 Plot: Museum guard Larry Daley heads from New York City to London in order to save the magic that brings the displays to life, as the tablet is losing its power. -- Chris Kavan

The Night at the Museum series has pretty much kept to the same script - pleasant, family adventure with humor thrown in. The final entry takes us to London, where Stiller must figure out why the magic tablet has been corroding and losing its power in the process. We get all the familiar faces - Robin Williams, Rami Malek, Owen Wilson, Steve Coogan plus some new faces, including Dan Stevens as a dashing (and a bit dim) Lancelot, Ben Kingsley as Ahkmenrah's dad and Rebel Wilson as a London security guard. All in all, a fun trip but pretty much a retread of the first two.

Good kids, not for me

For the final night, the final movie and the film ended...so so.

The story is about Museum guard Larry Daley played by Ben Stiller, heads from New York City to London in order to save the magic that brings the displays to life, as the tablet is losing its power.

A quick recap of the other two Museums films and then I will talk about the third one: The first Night at the Museum film I thought was pretty good and solid family film. It's harmless and very creative of what the creators can do with the famous figures of are history. But the second movie I thought was a big mess. I remembered not laughing that much while watching the film, and is it just me or the movie was like it was pleading for me to laugh at it but I was left in silence for the all film. So yeah I didn't like the …

No posts have been made on this movie yet. Be the first to start talking about Night at the Museum: Secret of the Tomb!