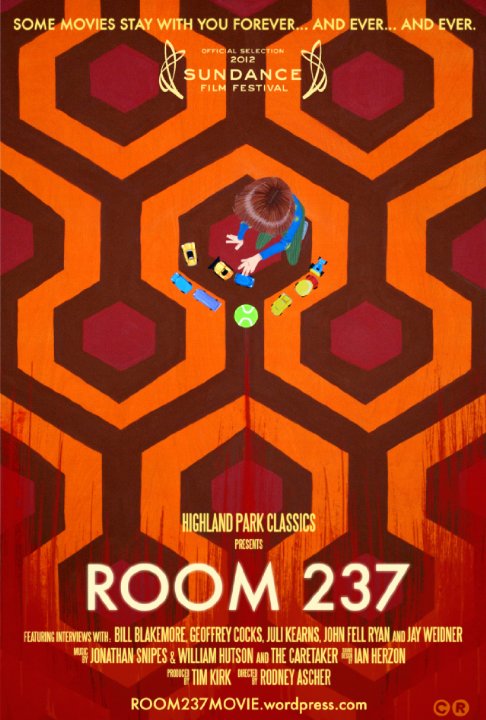 Plot: Documentary that explores just some of the theories brought on by Stanley Kubrick's classic horror film, The Shining. Featuring five different points of view - it will lead viewers through a maze that may well bring up more questions than answers. -- Chris Kavan

This all documentary could have been a interesting and a great Documentary, but the pasting is messy and the overall movie itself is dull. Room 237 is documentary featuring five different points of view - it will lead viewers through a maze that may well bring up more questions than answers. All through out this documentary you can hear different people talking out of their ass, because all of the facts and theories in documentary are mostly silly and kind of pointless if I have to say. Laughable, all over the place and overall a messy documentary that could have been interesting. If this looked at all the hidden secret's behind The Shining it would be watchable, but that not the case here.

What I got out of this documentary is that The Shining may just hold the secret behind the Holocaust and the (fake?) Apollo moon landing... and also that people have way too much time on their hands. It's both fascinating and laughable at the same time - but I applaud the people who dug deep into this film to come up with such... interesting interpretations to a classic horror film. Are they right? Maybe - or maybe they're a bit unhinged, but it's a good watch for Kubrick fans at least.

Room 237 is a very slow and patient, but mostly fascinating and sometimes scary documentary on the secrets of Stanly Kubrick's great horror film, The Shining. Through voice overs and film footage, five film buffs dive deep (very, very, very, very, very, VERY deep) into the secrets, the underlying elements, and subliminal messages of The Shining. I found some of their ramblings to be rather laughable, while many of them are interesting and pretty terrifying. It's a difficult film to sit through if you become uninterested - I grew bored during most of the second half. But if you're a fan of Kubrick (I love some of his films, The Shining and A Clockwork Orange in particular) you will find a lot to enjoy in Room 237. 2.5/4

While I welcome any interpretation of what The Shining means, I have to admit that in this movie, I felt myself grow tired at several occasions of these fans reading unneeded stuff into the story that they actually didn't know much about.
Their reasons are viable and they seem like hardcore fans that have analyzed the movie countless times, but none of them really ever get to a point. One says: Oh, it's about the Holocaust. Another says: Oh, it's about Indians.
What?
Where in the movie did Kubrick send a message about native Indians? Okay, sure, there are many intentional gags and posters of Indians hanging on the wall and little items like that, but: SO WHAT?
Get to the point! Finish your reason! Tell me what you think it means and don't just say what you see like a child! …

This is a brilliant documentary on more than one level. Not only is it near-perfect in it's construction, using voice over and footage from every film in Kubrick film instead of straightforward talking heads. Room 237 is ESSENTIAL viewing for anyone serious about about film, especially Kubrick fans. If you think The Shining is just a basic, straight forward, horror flick, think again. This documentary will open your eyes (and your thoughts) to multiple theories presented throughout the classic horror film. Some are absolutely mind-blowing, while others are a bit of a stretch. But ultimately, this is for fans of film or anyone looking for a good documentary. No, a GREAT one. Thought provoking, endlessly fascinating, eye-opening, thought-provoking, and obviously made with great care …

Documentaries About Movies by Protozoid

No posts have been made on this movie yet. Be the first to start talking about Room 237!